Admired By The Doog – But Unfulfilled At Molineux

Irish International Who Didn’t Make It With Wolves

How Charlie Bamforth keeps tracking down the forgotten Wolves names of his youth, we don’t quite know. But he has been at it again – this time locating a forward who was big news in Northern Ireland and who briefly threatened to break through at Molineux. Here’s the latest despatch from California from our no 1 guest writer. 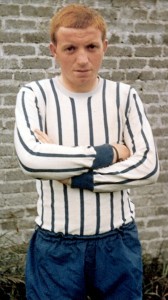 Ray Gaston in Coleraine colours in the mid-1960s.

Perhaps it was an unlucky day for him to travel to Wolverhampton, for his time at Molineux was short. But as a formative experience in a prolific goalscoring career, surely his brief time in old gold served its function..…indeed, there might have been a reprise had Derek Dougan’s hopes come to fruition.

“I had only played a couple of games for Coleraine’s first team but a local scout had been watching me and Bill Shorthouse came over to sign me” he said. “I think it was £3,000 or £5,000, something like that.”

That was in the May of 1965, just as the mighty Wolves had been relegated for the first time since returning to Division One in 1932.

Gaston had been an 18-year-old part-timer at a club who had just won the Irish Cup, although he was not in the victorious team. He spent the summer training hard with the legendary Coleraine manager, Bertie Peacock (ex-Celtic), to get himself ready for full-time training.

“I was happy at Wolves – but homesick. I lived on Dunstall Road, in digs with Mrs Wells alongside David Galvin and John McAlle. Jack Taylor’s butcher shop was yards away.” 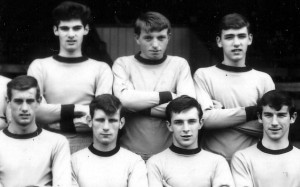 Ray in between his fellow lodgers Dave Galvin and John McAlle on the back row of a 1965 Wolves team photo.

Galvin remembers Ray’s party piece: “He would kick the ball as high as he could and then trap it with his backside!”

In no time, Gaston was knocking them in for the second team in the Central League. The Express & Star recorded how he scored a spectacular headed winner from a David Thompson cross at home to Liverpool on the night Alun Evans played as a 15-year-old.

“Joe Gardiner and Bill Shorthouse ran the side. Ronnie Allen was coaching the first team. Andy Beattie was the manager but he wasn’t well. We saw little of him.

“I got disenchanted with Allen. He told me before one Central League game that if I did well, I’d be in the first team squad next week. I scored a hat-trick but I was still in the second team the next week.”

One of Ray’s earliest reserve games was a 3-0 win over Derby at Molineux – and he discovered the half-time scoreboard.

“I had no idea what that thing was with the A, B, C and so on. All of a sudden, the crowd started going crazy. I asked Alun Evans what was happening. It was the score from the first-team game at Southampton. Wolves were 5-2 down.”

That was the infamous afternoon on which they conceded nine goals. The fact they themselves scored three suggested there wasn’t a lot wrong with a forward line boasting the likes of Hughie McIlmoyle, Peter Knowles, Dave Wagstaffe and, soon, Ernie Hunt. 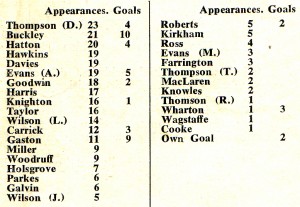 Meanwhile, the attacking competition in the reserve side included Bob Hatton and Gordon Roberts. Nevertheless, Gaston struck nine goals in just 11 games for that team. It seemed only a matter of time before the nod would come but a combination of homesickness and disenchantment found him back on the boat to Ireland before 1965 was through.

Re-installed at Coleraine, Ray continued his phenomenal scoring and was again attracting the scouts. Even more important to him, he also attracted the attention of his country.

“What a marvellous experience!” he added. “It was a thrill to play with Pat Jennings. I was a big Spurs fan, of Jimmy Greaves especially. Dougan said to me: ‘We’ll bring you back to Wolves.’ It didn’t happen.”

Very soon after, Gaston signed for Oxford. “That was a terrible mistake. They put me in the first team too quickly – I was still adjusting from being part-time.”

Gaston made only a dozen Second Division appearances while at Headington and, in February, 1970, found himself loaned to lowly Lincoln.

“I remember the snow! Graham Taylor was there and Ray Harford, too: a good bloke, very quiet.”

A return of one goal in four appearances brought Ray’s English career to an end and it was back to Coleraine before a stint with Finn Harps and then Ballymena. “By now I had lost interest,” he admitted.

And so, back once more in his beloved home town of Coleraine, he took up his trade as a plasterer before embarking on factory work. He lives there to this day.

He has, at heart, always been a Coleraine FC man, and the supporters remember him fondly ever since his first game at The Showgrounds in February, 1965, when the regular centre-forward was a no-show for a match against Ards. To set the habit of a lifetime, he scored in a 2-1 win. 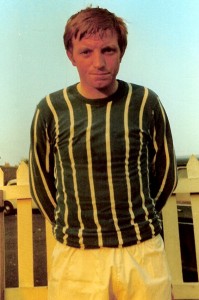 Gaston back on the patch where he is revered.

By the time he finished his career in the blue and white stripes, in 1972-1973, he had hit 63 goals in 114 starts for them. That year, his son Paul was born – and the latter went on to a career at centre-half for Coleraine that spanned 551 appearances (49 as a substitute) with 77 goals.

The name Gaston is revered indeed down Ballycastle Road.

* Our warmest thanks to Hunter McClelland for supplying the photos from Coleraine FC.