A Rare Take On The Present

Our regular readers well know that we are not given on this site to voicing our opinions too often on present-day events.

We may react to happenings or dates by making a link with something that has occured in the past but there are many other places where supporters can go for up-to-date news.

Such is the tension at the foot of the npower Championship now, though, that we couldn’t let the unfolding of the survival scrap go without a few random thoughts harking back to seasons of yesteryear. So here goes: 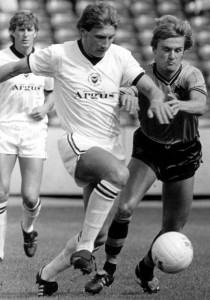 * When Wolves last went down from this level in 1984-85, the title in what was then known as the Second Division was won by Oxford – who have since played in non-League.

* And who accompanied Wolves in the bottom three when they also dropped straight through the Third Division 12 months later? It was Cardiff (promoted to the Premier League this week while Wolves were thrillingly beating Hull) and Capital One Cup winners Swansea!

* Cynics reckon there will now be three Welsh clubs in the top flight next season……Cardiff, Swansea and Gareth Bale!

* When Wolves were relegated from the Third Division in the spring of 1986, their last home game was a 3-1 home win over Cardiff, with whom they had also tumbled from Division Two the previous spring. Their penultimate away game was a 5-3 defeat against this spring’s FA Cup finalists Wigan.

* Dean Saunders is partly right to be quizzical as to why his side have 51 points and are still under considerable threat. For example, amid the relegation Wolves suffered at the end of a 46-game League campaign in 1985-86, Bury survived with 49. The current manager refers to the fact that 41 would have been enough to survive at this level 12 months ago, although it’s worth making the point that that is only because Portsmouth had been docked ten points for going into administration.

* Beware Wolves having three managers in a season at this level! They also flirted with the drop when Graham Taylor, caretaker Bobby Downes and Mark McGhee were the men in charge in 1995-96. The club struggled to 55 points that year – three more than achieved by Millwall, who were in the highest of the three relegation places. In 2000-01, Colin Lee, caretaker John Ward and Dave Jones had the duties in succession to each other and the same tally of points had the side in a final placing of 12th. But that was only seven above relegated Huddersfield – thank goodness Ward oversaw the winning of nine points out of 12 in his four-match stint. 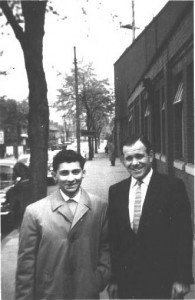 Alfred Camilleri outside Molineux with Norman Deeley in May, 1960, three days before the winger became a Wembley hero as Wolves beat Blackburn in the FA Cup final.

* So how many points do Wolves need from their last three games to be safe? Four seems to be a par score in the guesswork. And in all of their last nine seasons in the second grade prior to this one, they took four or more from their final trio of fixtures. The last time they failed to do so was in 1998-99, when they drew successive games in the run-in and then lost at home to Bradford on the last day.

* And finally…..an example of how much people care about Wolves and their plight. In quick succession on my way to the ground on Tuesday night, I bumped into a group of fans over from Scandinavia, Dave Slape from London Wolves and finally Malta Wolves’ Alfred Camilleri. Shortly before, I had met up with Dave Hough from North Wales and his good friend Fred Goodwin, the former Molineux wing-half who has spent much of recent decades in New Zealand and France. Never underestimate the ‘pull’ of this club.