A Charity Double – And A Hint Of Sadness

With the end of the season close, we seem to have gone into overdrive with work and other engagements of a Wolves nature. But not all of our duties have been happy ones.

Monday, March 24: Enjoyed interviewing Mark Burke, as ever, in this case for the forthcoming Wolves v Middlesbrough programme. He now scouts for Boro, often in Holland, and had fascinating tales to tell about his time as a player at Ayresome Park. Tony Mowbray’s side are having a shocking time of it but you can imagine the manager’s fluid style appealing to him.

Wednesday, March 26: Popped in to see Peter Knowles in Marks and Spencer, Wolverhampton, and was pleased to be told by him I was welcome to go back in the near future so he could sign a retro Wolves shirt (the style he wore in his hey-day) I have at home. The jersey is going to help raise money for needy children in Africa thanks to the efforts of Staffordshire-based Burnley fan David Grimshaw.

Friday, March 29: Met Messrs Mowbray and Venus at the Copthorne Hotel in Brierley Hill while doing some non-Wolves work. They clearly still fancy their chances in the Championship promotion race. There were cheers from the coaches and their backroom colleagues when, in the live match they were watching, Millwall scored a late winner at Leicester. 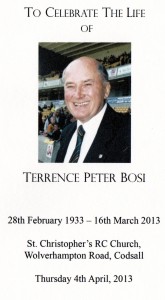 A tribute to a full life.

Monday, April 1: Popped to the home of Glynne Wetton en route for St Andrew’s and purchased five pieces of the cut-glass being sold off by Bert Williams in aid of the Alzheimer’s Society. Bert and his long-time pal have done sterling work for the charity and we found ourselves attracting several orders from others when we popped in to buy ourselves something for the mantelpiece. A good day was rounded off by the victory at Birmingham, where I bumped into Joe Gallagher – a regular occupant of the press box there

Thursday, April 4: A sad day…..attended the funeral of Molineux match-day host Terry Bosi in Codsall.  Was surprised to learn that Terry, whose job was to welcome the officials to the stadium and ensure they were looked after, had turned 80 a couple of weeks before his passing during the weekend of Wolves’ home win over Bristol City; also to learn that he had run the line when my then home-town team Stafford Rangers beat Barnet 3-0 in the FA Trophy final in 1972. The mood was lightened by a visit to the Baggies Sports Hall in Halfords Lane prior to a Steve Clarke press conference next door. The manager and his coaches Kevin Keen, Keith Downing and Dean Kiely lost 6-0 to the Sporting Club Albion powerchair football team in a special challenge match and Keen had the indignity of receiving the first red card of his career following an unfortunate collision.

Saturday, April 6: Spoke to former Wolves forward Paul Walker before departing for the Stoke v Aston Villa game and passed on some contacts details for another Yorkshire-based 1960s Molineux man, Stuart Darfield. The two haven’t met for decades despite their relative proximity but hope to do so over a game of golf also involving Mike O’Grady and Jimmy Seal in the near future.

Wednesday, April 10: Expressed my deep gratitude to Mick Hollifield for his considerable help in making an interview possible for the programme for next Tuesday’s Molineux clash of two of his former clubs, Wolves and Hull. Mick lives near Sydney and his inaccessibility to Skype might have made communications difficult but he played a blinder in sending long and detailed answers by email. It’s not just his close friendship with Mick Matthews that provides a tie to his past. He remains very nostalgic about his time as a player here.

Dave Wagstaffe.....will have the best wishes of Wolves fans everywhere.

Tuesday, April 16: Enjoyed a half-hour catch-up in a city centre pub restaurant with Freddie Goodwin and his Kiwi wife Wendy after they boarded a train from Stockport and came to watch Wolves’ win over Hull. They are living over here again after selling their property in France and their good friend Dave Hough, who is resident in North Wales, is likely to see to it that this wasn’t a one-off visit to Molineux.

Sunday, April 21: Heard via his partner on Facebook that Dave Wagstaffe had suffered a heart attack in the early hours of today – but was now out of theatre and out of danger.