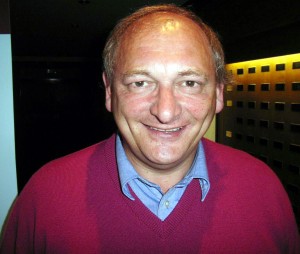 Kindo suitably attired when greeting Wolves Heroes on a visit to Turf Moor.

Steve Kindon is to mark the crucial forthcoming Wolves v Burnley weekend by compering a dinner get-together of several of his former Molineux team-mates in Cannock.

The award-winning speaker will be at the microphone in the Premier Suite of the town’s Bar Sport on Sunday evening.

Also due to be present are John Richards, Geoff Palmer, Kenny Hibbitt, Willie Carr, Steve Daley, John McAlle and Phil Parkes, although Dave Wagstaffe will not be able to attend now as he continues his recovery from the heart attack he had on Sunday.

Richards, Palmer and Hibbitt all played in both of the club’s League Cup winning teams while McAlle lined up at the twin towers against Manchester City in 1974 and Carr appeared in the side who beat Nottingham Forest at Wembley six years later. Parkes and Daley featured strongly in the run to the UEFA Cup final in 1971-72.

Supporting Kindon and Daley, who is also a former Soccer Speaker of the Year, in their work at the mic is Wolves-supporting Cannock comedian Ian ‘Sludge’ Lees.

Tickets for the four-course meal, which kicks off at 6pm, cost £35 or are priced at £30 each if bought as a table of ten. Part of the proceeds go to Compton Hospice.

There is interesting timing to Kindon’s return to the patch, given who Wolves’ opponents are in Saturday’s huge game at Molineux. 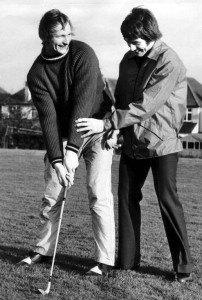 Messrs Kindon and Richards during a day off in their Wolves careers together.

He played well over 200 games for the Clarets and also won England Youth, England B and under-23 honours.

Like Richards, he was born in Warrington in 1950. They celebrate their 63rd birthdays within the space of two weeks of each other late this year.