Arsenal’s Sporting Gesture Is A Familiar One To Wolves

The teams in the programme for the postponed Manchester United v Wolves game in February, 1958.

Guards of honour, such as the one planned as a tribute to Manchester United’s title-winning squad at Arsenal tomorrow, may be comparatively rare in today’s cut-throat game.

But there was a time when they were more plentiful and Wolves. as with several of football’s other innovations, were at the vanguard of the movement more than half a century ago.

It is thought, in fact, that the one they were given in 1958 at Old Trafford, no less, was the first gesture of its kind in this country.

United deserved extra gratitude 55 years ago this week for finding the time to salute their conquerors, with Stan Cullis’s side having secured the crown thanks to a 2-0 home win over Preston two days earlier.

There was still a dark shadow across football in the city two and a half months on from the Munich air crash, so Wolves’ players were particularly touched by the show of sportsmanship. And they showed their appreciation in the way they knew best – by running out 4-0 winners!

The hosts’ doffing of caps was a new one on the Express & Star’s Phil Morgan. He wrote in his match report the following night: “With one of the nicest gestures I have seen on a First Division ground, the United, first out, lined either side of the entrance to the dressing room tunnel to form a guard of honour for the new title holders and to lead the applause as they came on to the pitch.”

Noel Dwyer probably blinked harder than most when he emerged into the daylight. He had been on the golf course at lunchtime when summoned north in a hurry as Malcolm Finlayson was taken ill around midday.

The Dubliner had made his debut only earlier that season in a 3-2 win at Aston Villa and the victory at United was the first clean sheet he had kept in the senior team, at the fifth attempt.

The game at Old Trafford, which was famously rearranged due to having originally been scheduled for two days after the Munich disaster, had another slice of rarity value to it – the taking of a penalty by Peter Broadbent.

Regular taker Eddie Clamp, who would shortly depart with Bill Slater, Broadbent and skipper Billy Wright to the World Cup finals, was limping at the time after a knock on the foot. Broadbent safely converted to complete the scoring after Clamp had netted earlier to take his goal tally for the season to ten. 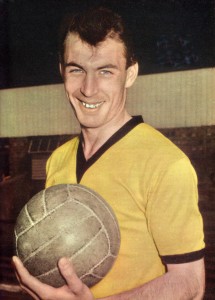 Eddie Clamp - among the scorers after Wolves' players had been feted at Old Trafford.

The guard of honour was not a one-off. Twelve months later, Leicester’s players did the same at Molineux to mark the winning of a third title in six years by Cullis’s men.

That moment, which put broad smiles across the faces of Wright and Finlayson, is one of countless that is stirringly captured in the well-received 2012 coffee table book, When Football Was Football: Wolves.

An entire double-page spread is devoted to the entry of the heroic players through the applauding blue line, the previous two pages being given over to a dramatic picture from the title-winning victory over Luton shortly before.