A Meet-Up Down Under With Rock Legend

JR On The Stadium That Robert Rocked 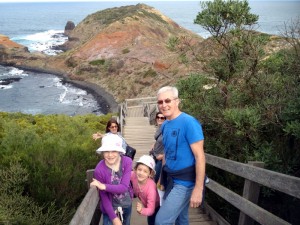 Richards at Mornington Peninsula with seven-year-old Emma, five-year-old Lydia and two of the other ladies in his life.

John Richards has revealed how he has had a fond recent reunion on the other side of the world with a man who is no doubt sharing Wolves’ current pain.

Wolves Heroes’ co-owner and his wife Pam have not long returned from their latest visit to Australia, where they spent four weeks with eldest daughter Kim and her family in Melbourne.

And it was there that they caught up with one of the club’s most famous supporters, Robert Plant.

“Pam was looking on the Internet one day while we were over there and spotted that Robert was playing in the city with his new band, the Sensational Space Shifters,” Richards said.

“Fortunately, I have a number for him, although it was in my time on the board at Molineux that I got to know him rather than when I was playing and he would appear in the occasional testimonial match.

“I rang him and he said: ‘I’m in Melbourne.’ I said: ‘So are we!’ And, from there, he invited us to the show, which was at the Rod Laver Arena right by the cricket ground, and welcomed us backstage to meet the other band members afterwards.

“They had heard of me, so obviously he shares his love of Wolves with them!”

The Richards had never previously seen the rock legend on stage and were impressed by his appeal so far from home at the age of 64.

The Shifters were on a Southern Hemisphere tour which took in South America and went on to Tasmania and New Zealand after dates on the Aussie mainland. Plant has been back home in America since and has a big date in Chicago in the summer.

“There were over 9,000 there and it was virtually full,” John said. “It surprised us that the concert was attended by fans of all ages……from early 20s to the old rockers who had Robert’s hairstyle and were even older than us! 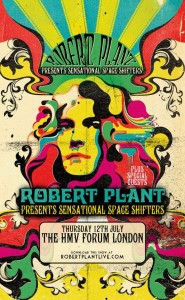 “We were sat next to two guys who were musicians and who also had tickets backstage. They were thrilled when we said we would introduce them to Robert.

“He wanted to talk Wolves rather than talk music with us, of course. At one point, he spotted a Wolves banner in the crowd and acknowledged that with some banter, which probably went over the head of most of the spectators.

“He is obviously disappointed with what has been happening here but he does have one small comfort…..his keyboard player is a Bristol City supporter.”