Walker On Film As Part Of All-Star Cast 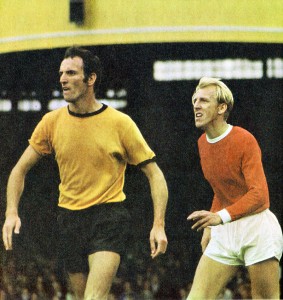 Ian Ure, who was making his debut, refuses to let Derek Dougan stray far from him in Wolves' home draw with Manchester United in August, 1969.

In one of our previous Memory Match features, we focused on a televised 3-1 Wolves victory at Old Trafford early in 1972 during a winter in which Bill McGarry’s side were in a rich vein of form and heading towards the UEFA Cup final.

Two seasons before that, when matches were shown in black and white on most sets, Manchester United were the visitors to Molineux for an early-season League fixture that the sides approached in very different moods.

Wolves, once more in black shorts rather than the all gold they had worn for the previous four years or so, had opened their first full campaign under McGarry with four wins out of four and scored 13 goals in the process – a record that left them level on points at the top with Everton and Liverpool.

United, by contrast, had lost their previous three League matches since an opening-day draw at Crystal Palace, and their defeats were all emphatic ones – 2-0 and 4-1 at home to Everton and Southampton respectively and 3-0 in the return at Goodison Park.

So why are we spotlighting a Molineux clash that ended goalless in front of a huge crowd of 50,873?

For no better reason than the Wolves old boys’ network – Paul Walker, to be precise – has been busy in coming up with some highlights of the game.

Thanks to his efforts, we have recently taken delivery of  a 12-minute package from the ITV regional archives, with the late Hugh Johns as commentator, and enjoyed this unexpected slice of nostalgia.

“Someone in London was kind enough to dig out some footage of this game and let me have it,” said Walker, who filled the left-winger role against United in place of the injured Dave Wagstaffe, as he had done in the preceding 3-2 victory at Southampton.

“It’s a lovely keepsake of one of the biggest games I played in. Best, Law and Charlton were all there in United’s side but we seemed to give as good as we got and might well have won it.

“What is obvious from looking at the film, though, is how packed Molineux was that afternoon. It was absolutely heaving and produced a great atmosphere on occasions like that.”

Hugh Johns informs us, in fact, that the gates were shut long before kick-off with many fans still outside, that bit of the commentary being delivered just as a youngster or two underline the point by shuffling back so Peter Knowles can take a corner! And there’s another reminder of those pre-segregation days because one of the fans by the flag is in a United scarf.

All the action from this fixture on August 23, 1969 is from the second half, with Wolves going closest through a Derek Dougan shot that hits the foot of the post and United threatening mainly through a Willie Morgan shot that Derek Parkin clears brilliantly off the line. 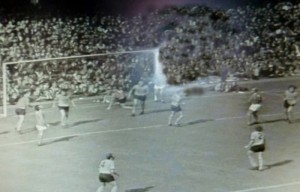 A snatch photo off the tele! Wolves defend in depth to keep United out. The no 4 is skipper Mike Bailey and the no 2 is Les Wilson.

Walker, described as a ‘youngster just coming to the surface’ after making his full debut at Newcastle in the last game of the previous season, fires another decent chance wide and there is a familiar glimpse of tantrums.

Although Knowles was to walk away from football just a fortnight later, he appears utterly committed in these clips and even hurls the ball to the ground in disgust when told to take a free-kick further back! Teams: