Messages Of Sorrow From Afar

Wolves Down – But Here’s To A Quick Return 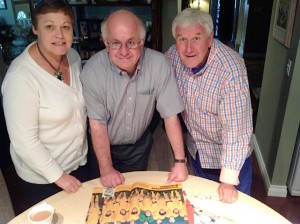 Les Wilson and Charles Bamforth have become two of our first readers to use this site to express their sadness at Wolves’ relegation.

The two were together in Vancouver just over a week ago, when California-based Charles presented his host with a treasured keepsake as a token of his gratitude – a carefully compiled cuttings book from the 1960s.

Les contacted us via a long email that kicked off with the phrase: “I write with a heavy heart.” He remembers feeling the despair of relegation in his time at Molineux, although that 1965 demotion came a few months before he made his League debut in England.

And there was a positive response from the club then, with Ronnie Allen’s side returning in style to the top flight two years later and famously emerging triumphant in America in the summer they did so.

Wolves bounced back from the second tier at the first attempt in both 1976-77 and 1982-83, although the immediate drop that followed in 1983-84 was just the start of a long journey in the wrong direction.

Charles remained a Molineux regular through the 1980s and was indeed an entertaining contributor to the club’s programme before work took him to California, from where he made the recent journey across the border into Canada to make acquaintance for the first time with a man we had been able to introduce him to on line several years ago.

“It is, indeed, a terrible day,” he wrote in the wake of the defeat at Brighton. “I think we should be consoled, though, by the fact that the club went this way once before – and to the Fourth Division. Things were even worse in the eighties – only one side of the ground open, serious decay, bills unpaid. But as the town (now city) motto so rightly says: ‘Out of Darkness Cometh Light.'” 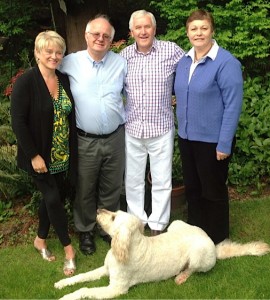 The Bamforths and Wilsons in Vancouver last week - with Scholzey!

Manchester-born Les was particularly thrilled to find one particular photo in the book he was presented with by the Bamforths.

For years, he remembered seeing a picture of himself playing for Wolves at Old Trafford in a First Division game contested in front of more than 50,000 in November, 1968, when he had the task of marking Nobby Stiles. He had also played in the fixture the previous year when the crowd was over 63,000.

“It was wonderful to have so many memories brought back by the articles and photos,” he said. “That was such a special time in my life and it was lovely to have a visit from a Wolves fan who is so knowledgeable – even if we did have to gently ask our wives not to talk football ALL the time!”