In Support Of Norman

Be Careful What You Believe! 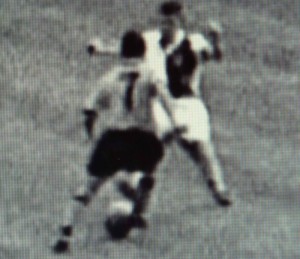 Sir Alex Ferguson has seen to it that not much has so far been written or spoken about the FA Cup final but be warned: We are approaching what might be termed Whelan Time.

If you haven’t read or heard it yet, Wigan Athletic’s septuagenarian owner-chairman will presumably be recounting his Wembley heartbreak once more – and riding roughshod over the good name of Norman Deeley in the process.

Dave Whelan has had a brilliant business career since being forced to hang up his boots as a result of the broken leg he suffered shortly before half-time in Wolves’ 3-0 final victory over Blackburn in 1960.

He has amassed a massive wealth with which he has helped in no small part to give Wigan an unlikely seven-year Premier League life – and a memorable day out when they tackle Manchester City on Saturday.

They are achievements far in excess of what anyone at the former Northern Premier League club could have visualised but you wouldn’t guess it from the sourness the aforementioned 76-year-old has consistently adopted.

In addition to being blessed with an outstanding business brain, it appears he also has sight far superior to the average man because he saw something the vast majority missed when he and Deeley collided on English football’s most famous stage.

“Norman Deeley got me good and proper, about a foot over the ball,” Whelan whined in his 2009 autobiography ‘Playing To Win.’ “There was no question in my mind that he had meant to do it.

“I got there seconds before Deeley but that was when I realised he had no intention at all of racing me for the ball. He was going for me.”

Now tell us if we are wrong but the accompanying photos – provided for us by Wolves historian and author Steve Gordos – tell a somewhat different story.

“I’ve had a beef about this for a long while,” said the former Express & Star sports editor. “I was at the game and there was no haranguing of Norman by the other Blackburn players. They just seemed to accept that it was an unfortunate outcome and another of the bad injuries the Cup Final seemed to be blighted by at that time.

“There wasn’t even a free-kick awarded. I have managed to get a video of the game and it shows that Deeley clearly touches the ball first as Whelan comes sliding in. If anyone was guilty of a reckless tackle, it was Whelan.”

For another view, try this: “Deeley and Whelan went for the ball and the next thing we knew was that the Wolves man was limping and David lay inert on the ground. (Blackburn inside-forward) Bryan Douglas already knew the extent of the of the disaster. David’s leg was in terrible shape but the whole thing was an accident.”

This isn’t the opinion of one of Deeley’s team-mates, nor of an independent witness. It is what Whelan’s own skipper Ronnie Clayton wrote on page 15 of his 1960 autobiography ‘A Slave To Soccer.’

There are those at Molineux who had hoped Whelan would formally exonerate Norman when several players from both sides, including Clayton and his rival skipper Bill Slater, were present together at the Wolves v Blackburn Premier League game two years ago.

But it has taken an occurence much closer to home for his tone to in any way change. Wigan winger Callum McManaman was widely pilloried for his tackle in a game against Newcastle earlier this season and Whelan saw fit to comment afterwards.

“When I broke my leg in the Cup Final, it was exactly the same type of tackle,” he was quoted by the Daily Telegraph as saying. “We both went for the ball. It ruined my career. 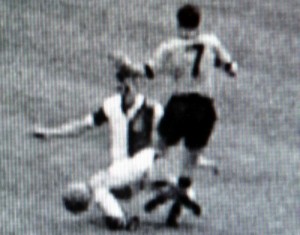 Hardly the most damning of evidence.

“I am not going to criticise Norman Deeley. These things happen in football. He came over the ball but didn’t do it with the aim of breaking my leg.”

A partial climbdown but nowhere near enough. Take a look again at the McManaman tackle on YouTube, cast an eye over the two photos illustrating this story and make your own mind up.

* Norman, who died in September, 2007 aged 73, scored Wolves’ second and third goals at Wembley after Mike McGrath’s own goal had broken the deadlock shortly before Whelan’s injury.