We Would Never Have Guessed It….. 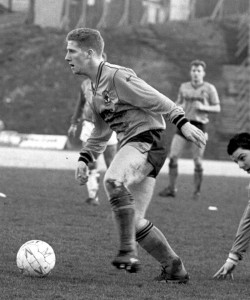 Springfield Park was at its bleakest and most uninviting…..and Wolves were without the main weapon in their armoury.

It was FA Cup second-round day in 1987-88 and the wind was fair howling down a tumebledown ground in which nearly 2,000 travelling fans were largely exposed to the elements.

The venue was shared that season by Springfield Borough Rugby League Club and, as a result of its over-use, the pitch was shocking. Such was lower-division life a quarter of a century ago.

But there was a spirit of adventure and fun about following Graham Turner’s side to these previously little-visited outposts as they set about making good their escape from the Fourth Division at the second attempt. And we had known worse at Halifax.

Wolves’ opponents on December 5, all of 25 seasons ago, were Wigan – playing at a grade higher and destined to finish seventh in it.

So the home side were very much favourites, especially as Steve Bull – the scorer of a hat-trick at home to Cheltenham in the previous round – was starting a two-match ban following his second sending-off of the season.

In this first ever FA Cup meeting of the clubs, the odds were stacked even more in Wigan’s favour when they led at the interval. But this was a Wolves team with plenty about them.

In front of a crowd of only 5,879, they bounced back to win 3-1 with goals by Phil Robinson, Robbie Dennison and the replacement for the 22-goal Bull, Jackie Gallagher.

The biting cold and rain on one of those floodlights-on-all-game afternoons didn’t seem so bad after all because the victory was confirmation that the renaissance was under-way.

It was Wolves’ second higher-division cup scalp of the season after they had knocked John Barnwell’s Notts County out of the Littlewoods Cup and then won at Manchester City in the first leg at the next stage, only to be eliminated back at Molineux. 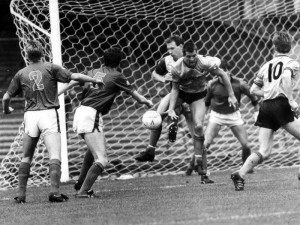 Wolves-Wigan combat of the late 1980s.

You wouldn’t have guessed back then that Wigan would EVER win the FA Cup. They were still some eight years pre-Whelan but were emerging as more of a force under the businessman when also paired with Wolves’ in a 1999-2000 FA Cup third-round tie across town that was settled by Carl Robinson’s last-gasp goal.

The hosts were then still in what traditionalists might call the Third Division and playing at the new stadium that would eventually have the initials of their not-so-modest owner in its name. Their rise had begun.

* Wolves’ two League visits to Springfield Park carry significance in the sense of the level the club will be playing at next season. They were already doomed to relegation when they lost 5-3 there in their penultimate Division Three game of 1985-86 but had been crowned champions of the same section when they drew 1-1 in their final match of 1988-89.