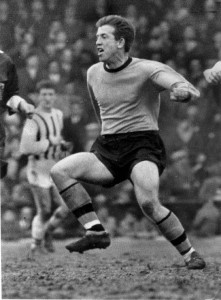 Peter in action against Albion in the early 1960s.

We at Wolves Heroes are delighted to recognise a landmark birthday in the life of Peter Broadbent.

The man who stands seventh in the all-time list of Wolverhampton Wanderers appearance makers was born in Elvington, Kent, 80 years ago today and played for nearby Dover before joining Brentford in May, 1950.

The fact that he went on to play 497 competitive first-team games while at Molineux suggested it wasn’t a bad £10,000 worth when Stan Cullis splashed out to bring him to the West Midlands in February, 1951.

He turned 18 at the start of the club’s mammoth end-of-season tour of South Africa in 1951, having made his senior debut in a home game with Portsmouth in the March of that season.

What is staggering considering his later success – namely the winning of three League Championships and an FA Cup – is that the first eight of his matches in the side all ended in defeat.

The run was broken with a 0-0 draw at Sunderland on the final day of 1950-51 and it wasn’t until the following December that he sampled victory for the first time, in the form of a 3-0 home win over Blackpool.

The first of his 145 goals for Wolves came in a derby at Albion and his first major honour followed in 1953-54 – a title-winning campaign in which he scored 12 times in 36 League appearances.

His solitary England under-23 cap came against Italy that season and B team recognition followed before he played seven games for the full national side, starting in 1957-58 and including the World Cup finals in Sweden just after Wolves had been crowned champions for the second time.

Broadbent, who also twice represented the Football League towards the end of the decade, became Wolves’ first scorer in major European competition when he netted both goals in a 2-2 European Cup home draw against Schalke in November, 1958.

He remained a major force well beyond the 3-0 Wembley victory over Blackburn in 1960 and was still going strong in the years of decline that followed the club’s fifth-place finish in 1962-63.

His final first-team outing for Wolves – his 452nd for them in the League – was also Dave Wagstaffe’s debut and came in a 1-0 home defeat against Aston Villa on Boxing Day in 1964.

Reader Paul Collins, from Glasgow, contacted us by way of a reminder of today’s happy event and wrote: “I count it as a great privilege to have watched Peter week in week out during his prime. Some of the things he did stay with you forever – like being a yard away from opponents and sitting them on the floor just by shrugging his shoulders. And hitting raking passes from near enough the right-back area to a left-winger racing mid-way in the opposition half.

“There was one time I remember when there were rumblings in the press and elsewhere that he wasn’t scoring enough goals. As if it mattered! He was laying everything on for others anyway. Five minutes into the next game, the ball is bobbing about just inside the penalty area. I was right at the front of the South Bank. He swung his right foot and I am still surprised that the goal rigging stopped it. He trotted back upfield in his undemonstrative way and you could almost hear the words: ‘And you were saying……?’ 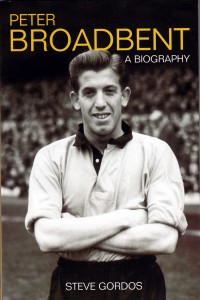 “Steve Gordos’s book on him is excellent. Long may it be in print.”

Broadbent joined Shrewsbury in January, 1965, and later played for Villa, Stockport and Bromsgrove.