A month of highs and lows has contained the saddest of get-togethers and also a glimpse into the fluctuating fortunes that come with the play-offs. We have also had a reminder of happy Wolves days in the lower divisions and another meeting with one of the club’s biggest 1960s stars. 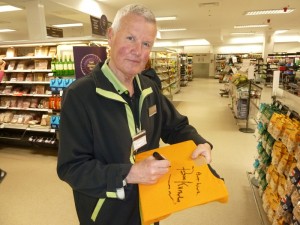 Wednesday, April 24: Had what will be one of my last chats with Peter Knowles in Marks and Spencer. Having recently agreed to sign a 1960s-style Wolves shirt for a friend who is raising money for kids in Africa, Peter did the honours today but told me he was retiring in June. He plays some golf these days but is still very much committed to his faith, so his time will be put to good use.

Saturday, April 27: The return of several members of Wolves’ victorious Sherpa Van Trophy team proves the highlight of a wretched afternoon at Molineux. We at Wolves Heroes played a part in this mini on-field reunion through the provision of phone numbers and we were delighted to join in the applause for Steve Bull, Andy Thompson, Mickey Holmes, skipper Alistair Robertson and Graham Turner’s no 2 Barry Powell. It was particularly poignant when Mark Kendall’s widow Gaynor appeared, clearly emotional, and was greeted by Micky with an arm round the shoulder as they walked together to the centre of the pitch. With Wolves taking on their 1988 Wembley opponents, today just went downhill from that high point.

Wednesday, May 1: Saw a number of ex-Wolves players at the funeral in Halesowen of Dave Matthews, who served Albion for an astonishing 50 years, all but the first few of them as their kit-man. Dave, whose daughter Alison has a senior administrative position at Wolves, died suddenly at home the day after visiting Molineux for the home game against Huddersfield. Among the multitude there to pay their respects were Alistair Robertson, Cyrille Regis (both pall bearers), Keith Downing, Mel Eves, Richard Skirrow and Mark Venus. ‘Veno’ texted me repeatedly for directions en route down from the north-east with his boss Tony Mowbray.

Monday, May 6: Saw Kyel Reid at Burton yesterday when interviewing members of the victorious Bradford side for the League Two play-off final and crossed paths with another former Wolves man today. While waiting to see a couple of Brentford players, I caught the eye of Darren Ward as he emerged from the disappointment of the Swindon dressing room at Griffin Park. Kyel, who has played 40 Bradford games this season and scored five times, netted the goal at Barnsley that secured the Championship title for Wolves in 2009 – one of his nine appearances while on loan at Molineux.

Wednesday, May 8: Received a call from Adrian Goldberg at BBC WM asking for a number or two of former players he might talk to on air about Wolves’ current plight. I never give out contact details without permission and was delighted to hear that Geoff Palmer was quite prepared to be interviewed on air. Adrian was happy enough with that arrangement, given that Geoff still lives locally, watches some matches and even has experience of playing in the third tier from his second spell at Molineux. 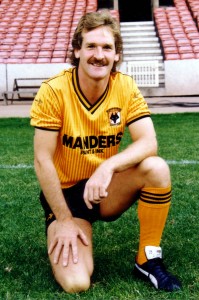 Ally Robertson....two glimpses of him in a few days.

Monday, May 13: Witnessed the most astonishing ‘half-time refreshments’ performance from Steve Claridge tonight. While nipping downstairs for a cuppa at the Brighton v Crystal Palace play-off semi-final second leg, I clapped eyes on him sat alone, dunking his biscuit so far into his hot drink that his fingers were submerged as well. That one put away, he then fished into his pocket for two or three more and did just the same. Amazing! I’d restricted myself to one so as not to deprive the late-comers. Does that make me more of a team player?

Saturday, May 18: Am planning for yet another funeral after recently hearing the sad news that the veteran former Birmingham Post & Mail sports writer Ian Willars had died. ‘The Duke’, as he was widely known around press boxes, covered Wolves for several seasons in his latter career before being taken ill in a game at Selhurst Park early in the 2002-03 promotion season. Some lovely words were delivered in his memory by David Harrison at Tuesday’s annual Midland Soccer Writers lunch in Dorridge – just the sort of occasion Ian would have loved.