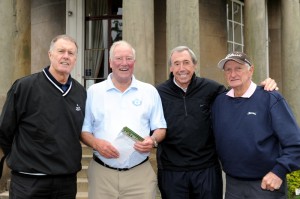 Not a bad line-up.....Ron Flowers is joined by (from left), Geoff Hurst, Gordon Banks and George Eastham.

First, an apology, because how I’d love to have spread the word of this happy reunion in advance! But protocol decreed otherwise. And so it came to pass that I had a one-man audience today with the bulk of England’s World Cup winning squad.

Our sincere thanks go to Ron Flowers for keeping a promise he made last year to tip us off when the time came for him to host the Charltons, Banks, Hurst & Co on this patch.

Once a year, the Boys of 66 meet for golf and a couple of days of socialising and engaged yesterday in friendly competition over 18 holes at Ron and wife Yvonne’s home course, Brocton Hall, on the edge of Cannock Chase.

Photographer David Bagnall, a long-time Express & Star colleague of this site’s co-owner, was welcomed as the event’s official photographer and we extend our gratitude for safe receipt of some of his splendid pictures.

I had my exclusive star-gazing opportunity this morning as the nation’s ultimate football heroes relaxed over breakfast before checking out of the magnificent Moat House Hotel, near Stafford.

Bobby and Nesta had headed off last night but, from the team who famously beat West Germany 4-2 at Wembley, Big Jack was still there to sign one or two keepsakes, as were Gordon Banks, Nobby Stiles, Roger Hunt and a certain hat-trick hero who drives a car with the GH3 66 number plate.

Their presence together, anywhere, is a fan’s dream; especially a fan with an autograph book. But so aware are they of how many well-meaning admirers they would attract with pre-publicity that a certain veil of secrecy hangs over their reunions.

So much so that even many staff at the Moat House, in the village of Acton Trussell, weren’t let in on news of their arrival until the night before.

The players’ wives were in attendance, too. They had a few hours at Trentham Gardens while Ramsey’s men were pacing the fairways.

And the hospitality was first-class. Ron, with some help from Gordon Banks, ensured that every competitor walked off with a prize – and every lady also. Eastham, over from his home in South Africa, took top honours and wondered whether news of his success would appear in the Cape Times while Anfield legend Callaghan was seen loading the golf bag he won into his car, with his Everton-supporting wife lamenting the fact it wasn’t blue.

It’s probably a treasonable offence to poke too much fun at these guys but they occasionally appear to do what many other Seventysomethings – and some of us who are considerably younger  – do.

Big Jack was having trouble deciding whether he needed his glasses to play shots because, with the same pair, he couldn’t see the ball on the tee and where it came to rest down the fairway. Someone else mislaid their scorecard and Jimmy Armfield realised he had his wife’s coat and hat in his car boot at tee-off time – a dilemma the official photographer was able to rectify before the ladies went off on their jaunt.

At 78, Ron, an 18-handicapper, is the oldest of the group and is the last to act as organiser. “Yvonne and I have only been attending for a few years because, when I ran the sports shop, I was always too busy to get away,” he told us.

“But the lads as a whole have been having this get-together for nearly three decades. Martin Peters had to cry off on Sunday morning as his wife had flu and he said it was only the second time in 28 years he had missed it.

“I was a bit nervous because we’ve had some great weekends in the last few years and I just hoped this one would meet the same standards. I prayed that they would like the course and the hotel but it seems they all thoroughly enjoyed themselves.”

Amid thought of absent friends such as the departed Bobby Moore and Alan Ball, there was also sadness that full-backs George Cohen and Ray Wilson weren’t well enough to attend while Yvonne read out a best-wishes letter from the widow of John Connolly, the winger who died this season. 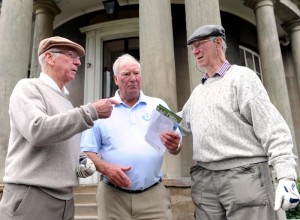 And so, with hands shaken, backs slapped and bills paid, they went their separate ways – Big Jack to the North East, Hurst down the M5 to Gloucestershire, Banks and Eastham on the short trip up the M6 to news that Tony Pulis had left their beloved Stoke.

They will be doing it all again in 2014 and teeing off together, venue and date unknown.

* It has been written before but it’s worth saying again….Flowers was told by Alf Ramsey on World Cup Final eve that he was likely to be playing against the Germans. But Jack Charlton, who had prompted the alert by being taken ill, recovered in time to leave the Wolves man marooned on 49 caps.