A Meeting Of Similar Minds….. 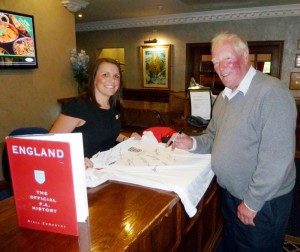 Ron Flowers signs a treasured keepsake for staff at the Moat House Hotel in Acton Trussell.

Ron Flowers’ high-profile reunion with the England World Cup winners this week came as only a partial surprise to Geoff Palmer – the former full-back knows how much his Molineux predecessor loves pounding the fairways.

And the two former Wolves men, who have both had spells as captain of their golf clubs, had an unplanned get-together of their own when they met in Portugal recently.

“Six of us went to the Algarve for a golf week and, about half-way through, I went with my mate to a bar for a coffee,” Palmer said. “He’s a Wolves fan and we were both looking at Ron and wondering whether it was him. When we realised it was, we had a nice catch-up.

“He was with his wife Yvonne because they have a part share in an apartment in Alvor and were over there for a month or so. We were in a hotel just down the road from them.

“We tried very hard not to talk about what has been happening at the Wolves and chatted about golf, among other things. I know how much he loves playing.

“He didn’t tell me about this weekend that he had coming up with the England lads but it isn’t a shock to me that they would do that sort of thing together. What a lovely way to stay in touch!”

Ron turns 80 in the summer of next year and shares a birthday with Palmer Senior, who is a few years older, having taken his lad to Molineux as a fan at the time the England legend was still playing.

While Flowers is a past captain at Brocton Hall, the course near Stafford that the Boys of 66 descended on this week, the younger man signed off in January from his year as skipper of Oxley Park. 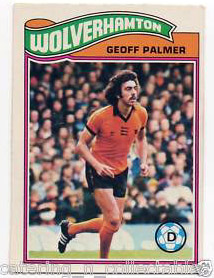 “We had a number of charity events and I was delighted to have helped raise £3,500 for the Air Ambulance,” Palmer said. “Being captain is great fun but it keeps you on your toes. My golf might improve a bit now!”

Three of Flowers’ 49 England caps were won against Portugal (twice at Wembley, once in Lisbon) and they were also the nation Sir Alf Ramsey’s team beat 2-1 in the semi-final of the 1966 World Cup finals.

Although Palmer broke through in 1973-74, he missed that season’s UEFA Cup clashes with Belenenses but played home and away against another Portuguese club, Porto, the following autumn.