Happy Memories Of Whit Weeks Past 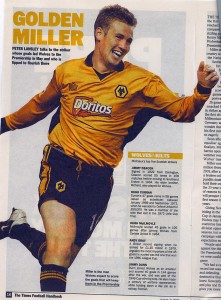 Kenny Miller, as featured in The Times by Running With Wolves author Peter Lansley. The striker was one of Wolves' Millennium Stadium heroes.

One special anniversary passed in the life of Wolves fans yesterday – and another is approaching in midweek.

Amid the various play-off disappointments of the nineties and noughties, late May has also twice been a time for celebration among the club’s supporters over the years.

On Whit Bank Holiday Monday in 2003, the Millennium Stadium was the setting as Wolves finally graduated to the Premier League after so many false dawns when they memorably made short work of Sheffield United.

In a game that most neutrals predicted would be right in the balance, goals by Mark Kennedy, Nathan Blake and Kenny Miller had Dave Jones’s side as good as over the finishing line before the half-time whistle had been sounded.

There were still nervous moments in the face of the expected Blades’ fightback and Matt Murray highlighted his man of the match contribution by pushing aside Michael Brown’s penalty.

But there was a strength about a Wolves side who had survived spells of heavy pressure to beat Reading home and away in the semi-finals and who had the likes of Paul Ince, Denis Irwin, Colin Cameron and skipper Paul Butler in their ranks, with Alex Rae on the substitutes’ bench.

Neil Warnock was gracious enough in defeat as Wolves reached the Premier League for the first time ten years ago yesterday, having not played in the top flight since 1984.

And the mood among the gold and black hordes, reflected in Sir Jack Hayward’s famous thumbs-up, was much the same when, at the ‘old’ Wembley, Wolves overcame Burnley 2-0 to win the Sherpa Van Trophy in 1988.

At 80,841 – an astounding figure for a game between two clubs from the Fourth Division – the attendance was well over 11,000 higher than it would be at the Championship play-off in Cardiff.

And the huge turn-out saw Wolves draw first blood in the middle of the first half with a twisting header by Andy Mutch from Steve Bull’s return ball into the area. 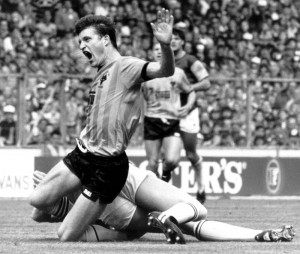 First goalscorer Andy Mutch is halted in full flight in the 1988 Sherpa Van Trophy final - played a quarter of a century ago this week.

Robbie Dennison’s brilliant free-kick soon after half-time brought valuable breathing space for a Wolves side destabilised by injuries to Micky Holmes and skipper Ally Robertson and Graham Turner’s men stood firm to add the trophy to the Fourth Division crown they had already lifted.

In the process, Mark Kendall kept a 28th clean sheet of what was already a record-breaking season for him – much to the delight of guest of honour Bill Slater.

It is exactly 25 years on Wednesday (May 29) since Wolves emerged victorious from what still stands as their most recent visit to Wembley and word has recently reached us of a possible June 26 get-together of the squad by way of reminiscence. Please look on here again for further details.