Another Star Keeper In Our Sights 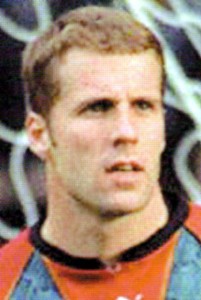 Mike Stowell has been lined up to step into the hot seat as the list of Molineux favourites targeted in John Richards’ popular Player Q & A series spills over into the start of a second ‘team.’

Wolves Heroes’ co-owner has so far conducted lengthy interviews with ten men for the feature after he had himself been in the spotlight when we set the ball rolling more than three years ago.

And Mike has now given us the thumbs-up, so we invite our readers, as ever, to join Molineux Mix members in submitting questions they would like to see put to him.

Interest should be high as we are talking of the man who has played more games in Wolves’ goal than anyone else alive or dead.

Stowell has spent the last few years as keeper coach at Leicester and is seen as a sufficiently senior member of their backroom team as to have had spells in joint caretaker control of the first-team squad.

He is also currently a first-team coach with the Foxes and has worked at the King Power Stadium with the likes of Sven Goran Eriksson, Gary Megson, Robert Kelly and Martin Allen, as well as Nigel Pearson.

International recognition came fleetingly for him and he impressed Graham Taylor with his attitude when part of the England B squad relatively early in a professional playing career that spanned all of 20 years – and that despite entering the game late.

“Mike was always a highly popular and respected member of the squad while I was on the Wolves board and has a lot of happy memories from his time at the club,” Richards said.

“I look forward to speaking to him at length and to going armed with the normal lengthy list of questions.”

Recently turned 48, Mike played 448 competitive first-team games for Wolves, eclipsing Bert Williams MBE’s record of 420 League and Cup appearances for the club when he kept a clean sheet in a victory at Birmingham in April, 1999. 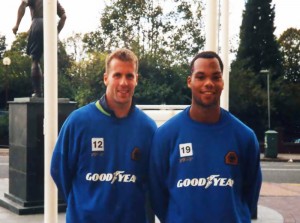 Mike and a young Joleon Lescott – as photographed by a fan.

The address to send questions is jr@wolvesheroes.com – or, if you prefer, please send them through our good friends at Molineux Mix.

He is not the only footballer in his household and hopefully our readers will also help prise out of him his somewhat unusual life as a commuter.

The full list of players we have so far featured in this area of our site (in something like formation order and with a certain radio summariser and Sky TV pundit in a slightly unfamiliar ‘Paul Cook’ role!) is: