Carrick Conundrum With A Molineux Twist

Answer At Last In Family Puzzle 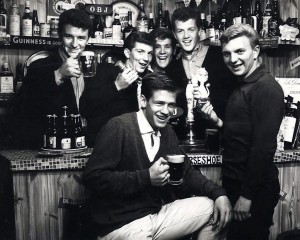 David Carrick, one in from the left on the back row, is hugged by Fred Kemp during a lads' trip to Blackpool in summer, 1964. Also next to Kemp is Peter Knowles, with Paddy Buckley far right. Far left is Glyn Williams while seated is Barry Keating, a Canadian then on trial at Wolves.

We at Wolves Heroes have helped clear up a long-standing mystery in the life of Les Wilson – but the outcome has left our close friend a little disappointed.

For several years, the Vancouver-based former Molineux utility player had dared to believe there was a link between his playing career here and the current Manchester United team he follows so avidly from afar.

Namely, that United and England midfield Michael Carrick was related to one of his best Wanderers pals of nearly 50 years ago.

“I shared digs for over a year with a David Carrick in Wombourne, where we well looked after by the Williams family,” Les said. “David was a good man in so many ways and had a very nice temperament.

“He and I used to hang out together, with the Williams’ son Gwyn, and David went on to have a Football League career despite not making it to the first team at Wolves.

“In closely watching Michael Carrick on TV, I detected a likeness with David, not only in their looks, but also in regard to their similarities on the field. They seemed to have the same running style.

“And the fact that they are both from the north-east encouraged me to think they might be related.”

To Wilson’s great sadness, David passed away from Motor Neurone’s Disease in 1989 and Michael’s continued emergence in the game, coupled with a mutual link over in Canada, prompted him to put feelers out several months ago.

Les is good pals with an Edmonton-based cousin of Michael’s wife Lisa (nee Roughead) and subsequently contacted the midfielder’s younger brother Graeme, who was once on West Ham’s books and is now an FA coach.

By email, he asked Graeme about a possible blood link with David Carrick but was told: “As far as we are aware, there is no connection from our family to David. My dad has looked into it and can’t find any links.”

We had offered to contact publications in the north-east – David was born on December 5, 1946, at Evenwood in County Durham – to see whether any readers up there could shed light on the matter.

But, on the last day of the Premier League season, when Michael led United out at The Hawthorns for Sir Alex Ferguson’s 1,500th and final match with the club, we did a little better than that. We snatched a quick post-match word with Michael, who told us, sadly, that David’s name meant nothing to him.

“I would love to have found that the two were related but it seems now that they aren’t, or weren’t,” added Wilson, who was also grateful we had done a little research for him in Wolverhampton Archive Library on the family.

“I probably have to accept that it’s all a bit of a coincidence that they were from similar parts of the country (Michael was born in Wallsend, Tyne & Wear). Maybe Carrick isn’t that unusual a name in England, especially up there.”

Here’s another coincidence, though, concerning a man described as a stocky, 5ft 7in winger…….

We reported on here how Les and his wife Lois recently had a visit from Diane and Charles Bamforth, the two men having already struck up a close friendship after getting to know each other through this website.

And, a few weeks ago, we stumbled across an article Charlie penned in a 1989 Wolves programme after hearing of David’s passing at the very young age of 42.

He reported how the player had arrived at Molineux in the summer of 1963 and added: “For two seasons, young Carrick plied his trade in the reserve and A sides, never fully establishing himself as a regular in the former, even after signing professional in December, 1964. 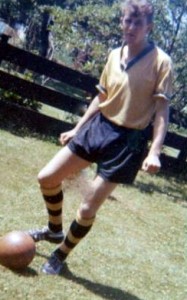 The young Les Wilson around the time he joined Wolves.

“Wolves had a plethora of wingers at their disposal at a time when the wide man was slowly moving out of fashion. Carrick switched to inside-forward but his seven goals in 17 second-team games in 1965-66 weren’t enough to convince Ronnie Allen there was a future for the young north-easterner in gold and black.”

The article goes on to say that David had moved on to Wrexham by the time of England’s World Cup triumph and became a team-mate of the teenage Graham Turner.

He scored three times in 20 matches for the Welsh club, served Altrincham and Port Vale after that and after several seasons of ‘skilful endeavour’ at Stalybridge Celtic and Witton Albion, stepped back up the ladder with Preston and then Rochdale. He left the League in 1975 for the third and final time, with close on 70 appearances to his name, and returned to Altrincham.

Carrick, like John Barnwell, Dave Clements, Jim Barron, Peter Knowles, Emlyn Hughes and Mike Bailey, were named at various times in the late 1960s in the top ten good-lookers list, as voted on by female readers in the Football League Review magazine.

“Life is certainly not fair,” Wilson adds. “David had a lot going for him.”