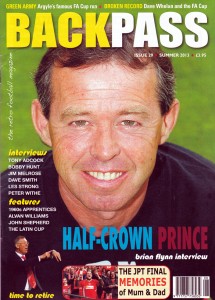 The cover to look for on the shelves.

Wolves have their usual generous mentions in the latest issue of the expanding football retro magazine Backpass.

The first two features in the glossy 64-page publication are about former Molineux strikers, in fact – albeit ones who achieved most of their fame elsewhere.

Peter Withe is interviewed at length by former Express & Star chief sports writer David Harrison and outlines the influence of Derek Dougan, Bill McGarry and others on his early career in the Football League.

Then comes a three-page spotlight, with a Charlton bias, on Jim Melrose, the forward whose goals on loan briefly gave Tommy Docherty’s Wolves hope in a dismal 1984-85 Second Division campaign.

Wolves Heroes’ David Instone is the contributor of a long piece on mid-1960s Molineux reserve Doug Griffiths that is rich on anecdotes and names of a gold and black persuasion, the former England Schoolboys captain reflecting now: “I always kept the good habits I was taught at Wolves.”

More fleeeting references are made to Leon Clarke and Paul Stewart, forwards who had permanent and loan spells at the club respectively, and we also had the chance to beat the drum in defence of Norman Deeley amid the on-going Wembley-related rants of Dave Whelan.

Add a mention or two of Graham Taylor and one-time Wolves youngster Geoff Crudgington, who also appears on a separate Crewe Alexandra picture, and there is plenty to go at for fans from these parts.

On a sadder note, there is an obituary of Bill Guttridge, who made a handful of Wanderers appearances early in the Stan Cullis managerial era. 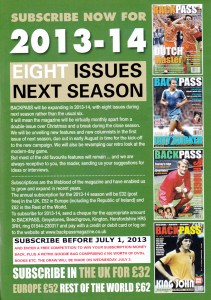 The way ahead for Backpass.

Backpass took out a full-page advert in the final of the Championship play-offs as a demonstration of its ambitious plans.

Having started with four issues per season and then increased to six, it will publish eight times in 2013-14, with subscriptions for the new term now welcomed at www.backpassmagazine.co.uk or by ringing 01544-230317.

The annual rate for the UK will be £32 (post free), £52 for Europe, including the Republic of Ireland, and £62 for the rest of the world. Both of the last two figures are inclusive of postage and packing.