Time For Whites – With A Gold And Black Tint

Big Turn-Out A Tribute To Jim 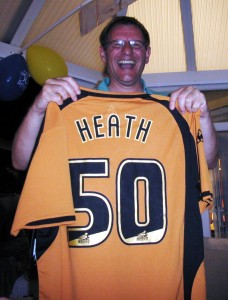 Jim Heath on his 50th birthday.

A cricket match in memory of late Wolves Heroes contributor Jim Heath at the end of this month is set to carry a strong Molineux flavour.

The game is being staged on Sunday, June 30 at Telford-based St Georges, where Jim was both fixture secretary and a junior coach, and where his son Jack is a promising batsman.

The Wolves ‘family’ are rallying in support of the President’s Day event, with Mel Eves, Derek Parkin, Steve Daley and Phil Parkes among those to so far pledge to be there.

A Load of Bull editor Charles Ross, the Express & Star’s long-time Wolves fan correspondent John Lalley, radio commentator Bill Hatton and Wolves Heroes’ David Instone are also due to be present and lifelong supporter Gwilym Machin and his wife Morag are travelling from Glasgow as a further underlining of the affection in which Jim was held.

And the turn-out will revive a link between the two clubs that goes back to the early years of the Stan Cullis reign at Molineux, when Wolves accepted an invitation to don their whites at the venue in the summer of 1949.

“I was 18 and was the youngest player in our team,” said current St Georges president Stan Higgins. “We had 2,000 here and the FA Cup, which Wolves had just won, was on show next to a policeman on the corner of the bowls green.

“I know we had a PA system in use, which was quite unusual then, and remember Johnny Hancocks, Billy Wright and Roy Pritchard being especially warmly welcomed as they were from Shropshire. Sammy Smyth and possibly Bill Shorthouse were playing as well, along with a few youngsters.

“It was a big event, held to mark the opening of our new scoreboard, but there was a lot of support for Wolves around here – probably still is – and fans went off to games by the bus-load.” 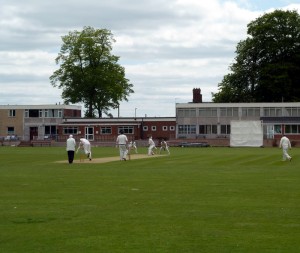 Hancocks hit a century at the ground when returning with Priorslee in the 1950s and Wright and Pritchard went back in 1990 to officially open a £20,000 bar extension.

Now club officials hope to see plenty of Wolves shirts in evidence three weeks tomorrow for a day that also marks the opening of the nets that bear Jim’s name after donations at his funeral in August took his contribution to the project to almost £5,000.

“The football club were obviously his other big love apart from his family and our doors will be open to anyone from there or elsewhere who just wants to come along and watch some good cricket and have a drink and a wander,” added Stan, who previously had seven years as chairman and 15 as vice-chairman.

“We have two 20/20 matches scheduled – one between youngsters including his son Jack at 10am – and another at 2.30pm between the main St Georges team and a side with a Wolves flavour.

“In between, we have his wife Christine and an English Cricket Board official in attendance for the official net opening ceremony and a lunch at 1pm that we are glad to say has sold out.”

The proceeds from the day are being split between the nets fund and Birmingham Children’s Hospital and will underpin the status of the Shropshire Premier League club as a major player in the county’s cricket.

The ground has also hosted six Shropshire matches against first-class counties in what used to be known as the NatWest Trophy, including a victory over Yorkshire, Geoff Boycott and all, in 1984. 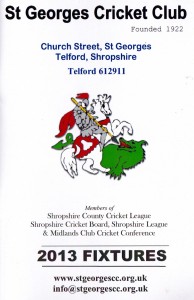 Club officials recall a century there by David Gower and a meeting of England cricket and football captains, namely Billy and Mike Gatting, at a match against Middlesex.

An auction will also be held during the lunch after a bench bearing the words ‘In memory of Jim Heath, happy days!’ is unveiled.

The key club details for those wishing to attend appear on the front of the fixture card that appears alongside this article.