Not Such A ‘Hell Of A Beating’! 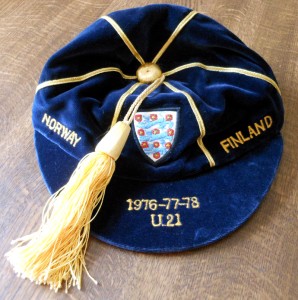 It took our friends in Norway to remind us of the fact but there was a time when England’s under-21s actually won when they travelled to take on their counterparts from the land of fjords and glaciers.

Far from the gloom of the 3-1 weekend defeat and today’s follow-up loss to hosts Israel, plus the accompanying rant in between from Stuart Pearce about the non-availability of fringe senior players, we used to hold sway over such opponents with plenty to spare – and with healthy West Midlands representation in the line-up.

We are indebted, in particular, to Odin Henrikssen – my accommodating and informative host on a recent flying visit to Bergen – for drawing our attention to the fact that John Richards and Peter Daniel were both in the side who won in his picturesque home city in the qualifying stages of the age group European Championships 36 years ago last week.

“I was still in my early teens then but remember England coming here,” said Odin, showing me through a host of Wolves scrapbooks and autographs. “I got John and Peter to sign as well as Laurie Cunningham and several others. England won the game, which I remember very well, and it was exciting to see a big hero like John playing in my city.

“A lot of Scandinavian fans follow Wolves because of the famous game at Molineux against Sunderland that was shown live on TV over here in 1969. I actually got interested through my uncle, who has recently celebrated his 70th birthday and spent time in Wolverhampton studying in the early 1970s.

“Like many other Viking Wolves members, I go over a couple of times a year to watch matches and we have a big dinner at Molineux on our visit in the autumn.” 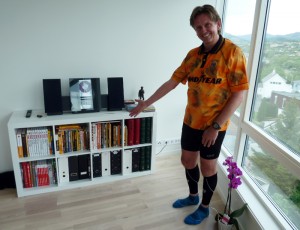 Odin at home, with some familiar reading matter.

Richards actually needed some prompting in recalling his international appearance in Bergen, wrongly thinking at first he had played there for Wolves rather than with the three lions on his chest.

The striker went to Norway with the club three times (in 1975, 1977 and 1978), the middle one of those trips coming only a few days before an under-21 international jaunt that also took in a game against Finland.

England won by the only goal in Helsinki – scored by Southampton full-back David Peach – and ran out 2-1 victors against the Norwegians, with John Deehan and Peter Barnes netting.

Daniel still played at that time for Hull, who had won one and lost one against Wolves as Sammy Chung’s side lifted that season’s Second Division title, the utility player winning seven under-21 caps in all. These two games provided Richards with his only recognition at that level, although he had previously represented the country’s under-23s six times.

“I remember I shared rooms in Scandinavia with David Peach,” he added. “We were both over-age players in the squad – I must have been 26 at the time.

“Les Cocker, from Leeds, was the manager and I just had time to come home from Wolves’ tour before packing my bags again and going out with England.

“I see from the record books that I was subbed in all three of Wolves’ games despite scoring a few goals. Sammy Chung would presumably have been looking after me in readiness for the England games but these end-of-season club trips were paid for by sponsors overseas, who would want guarantees that all first-team players were included if at all possible.

“At the time I was playing for England under-21s, there was talk of me winning a recall from Don Revie to the full team and there was a trip to South America coming up. That would have been exciting but it didn’t happen for me.

“As I remember, I was overshadowed by John Deehan and Peter Barnes in Norway and I played better in Finland. But I did go on the England B tour of the Far East and New Zealand the following summer.” 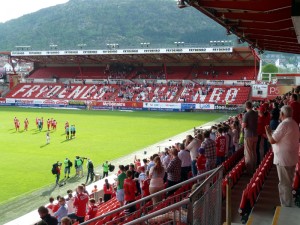 The return games against the Scandinavian countries a few months later showed how dominant England were against these particular opponents then. They beat them 6-0 and 8-1 at Brighton and Hull respectively, with Paul Bradshaw – then of Blackburn and on the bench in the shadow of Derby’s John Middleton for the away games – and Glenn Hoddle enjoying some full outings.

My recent hop over the North Sea had another Molineux link. The Norwegian Cup game that I dropped in on at Brann Bergen was against Mjondalen – beaten 1-0 by Bill McGarry’s side in Oslo on their 1975 visit.

* Many thanks to Per Magnar Meyer, Magne Ohlen and in particular Odin Henrikssen and Svein Solberg for their hospitality and making my short stay so memorable.