Happy Birthday To Him!

Greetings From All To Sir Jack On His Big Day 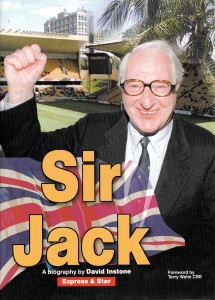 In adding our own warm wishes to Sir Jack Hayward on the occasion of his 90th birthday today, we considered it appropriate to remind ourselves of a few highlights and momentous happenings from his time at Wolves.

As he was at the helm at the club for 17 years, how about these 17 things to remember him by – some of them stretching back to before his £2.1m purchase of the shares in 1990?

1. Putting to bed the final fears that the club would follow their lapses into administration in the early and mid-1980s by going out of business.

2. Quickly stressing that Molineux was a world-famous venue and was where HIS Wolves would continue to be housed.

3. Insisting that every nut and bolt in a rebuild overseen by Wolverhampton-based Alfred McAlpine would be sourced in the town.

4. Splashing out £5,000 a year on an executive box in the then new and troublesome John Ireland Stand for three years in the early 1980s and allowing needy and handicapped children to use it in his absence. Their special day was further brightened by the provision of free meals and pop.

5. Re-introducing Billy Wright to the Molineux fold in a major way (as a director on his original board in 1990) and making the final years of English football’s ‘finest player and gentleman’ something special.

6. Building a spick and span new stadium of which we were all very proud following the old ground’s plunge into decay and a source of great embarrassment.

7. Insisting that he would come back and haunt anyone who ever tried to honour him by renaming the stadium as the Hayward Molineux.

8. Standing ‘like a voyeur’ outside the ladies on one of the concourses to assess the length of half-time queues. ‘Mmm, the Hayward loos……I could live with that title,” he said.

9. Paying his OAP’s admission money one night for the visit of Grimsby when Graham Turner was under pressure. He was there, supposedly on the quiet, to see what the fans were saying ‘because they know more than me.’

10. Financing numerous dinners at Molineux so members of the club’s Former Players Association could meet up once or twice a season and not just at funerals.

11. Offering a donation of £20,000 to the sports hall fund at Brewood’s St Dominic’s Girls’ School in 1987 if the headmistress, Sister Helen Watson, could name Wolves’ 1939 FA Cup final team. She could – and he coughed up.

12. Struggling to Wolves’ FA Cup semi-final with Arsenal in 1998 only 18 days after undergoing heart surgery – and insisting he was at Molineux early to wave off dozens and dozens of balloon-decked coaches.

13. Putting the club before his family – a matter that came to light amid stories of a split over financial matters.

14. Receiving a gold and black cake in the shape of a football and having The Happy Wanderer played at his celebrations two landmark birthdays ago. The long-time BBC voice of cricket Brian Johnston proposed the toast by calling him ’70 not out’ and ‘one of the biggest givers, not just of money, but of friendship to us all.’ 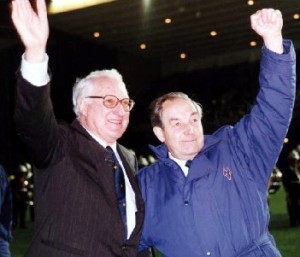 Sir Jack with the late Jack Harris 20 years ago.

15. Saying from the Bahamas at the end of Wolves’ dismal 1995-96 season: “It has been sheer hell out here listening to the results. Every time we lose, I feel like running a warm bath and slashing my wrists.”

16. Giving that famous Millennium Stadium thumbs-up in 2003 a few minutes before Wolves finally secured promotion under him to the Premier League.

17. Paying his debt to the club in full after confessing that, as a youngster, he had been known to wear out the knees of his trousers by crawling under the Molineux turnstiles. Having spent tens of millions on the ground and team up to 2007, he handed control over for a tenner.