Close season or not, we remain busy with our various meetings, communications and appointments; some of them memorable, some routine and others sad. And, as ever, they concern points far and wide…… 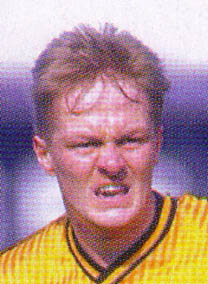 Keith Downing in typically determined mood with Wolves almost a quarter of a century ago.

Sunday, May 19: Saw quite a healthy sprinkling of former Wolves men at the first 5-5 draw I’ve ever witnessed – between Albion and Manchester United. In fact, it’s the first game I’ve attended that has contained ten or more goals. Met the midfielder Paul Jones coming out of the ground and, from afar, also saw Keith Downing, Kevin Keen and Eric Steele on the touchline. Maybe Darren Ferguson was also there as it was his dad’s 1,500th and final game as United manager.

Tuesday, May 21: Met keen Wolves fan Ben Bevan on the way out of the BBC WM studios, where I had been interviewed by Paul Franks towards the end of a memorable day. Paul was fascinated by my account of how I’d had a private audience that morning with more than half of England’s World Cup final team from 1966 (see May 21 entry) and he lapped it up. Bev was big mates with John Richards at the height of their respective careers but told me his favourite all-time Wolves player was Ron Flowers.

Thursday, May 23: Joined a number of past and present Wolves personnel at the Sutton Coldfield funeral of Ian Willars, the veteran Birmingham Post & Mail reporter who covered the club’s fortunes for several years up to 2003. Among the large gathering were Mel Eves, Charles Ross, David Harrison and, from the current or previous media office, Paul Berry, John Hendley, Lorraine Hennessey and Catherine Preece Hickman.

Monday, May 27: Received a request to connect Bobby Gould to the producers of a West Ham book about Bobby Moore. They want to speak to as many as possible of the surviving 65 Hammers players to have played with him.

Thursday, June 6: Picked up a nice anecdote about Mike Bailey during an afternoon which took me to the homes of Derek Jefferson and the former Birmingham and Charlton midfielder Alan Campbell in South Birmingham. I learned from Alan that he had taken over Mike’s digs after Ronnie Allen had made the England wing-half one of his first and best Molineux signings. Campbell started as a striker at The Valley but then dropped back and recalls Bailey popping in on the household to say hello one Saturday morning when Wolves were playing at West Ham.

Sunday, June 9: Caught up on some SkyPlus viewing and watched with admiration the interviews with Robbie Keane talking about becoming the Republic of Ireland’s most capped player of all time. He is already their leading scorer ever and is the current skipper – not bad for a lad who started off on his long, lucrative journey right here as a 17-year-old. I remember flying home with an immensely proud Chris Evans after his first home cap had been won at home to Argentina in 1998 in front of Wolves managerial duo Mark McGhee and Colin Lee. 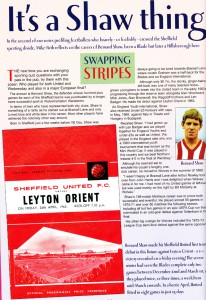 Thursday, June 13: Heard from Les Wilson that he and his wife Lois had been well looked after by the United States Soccer Federation this week when they were invited to watch the USA’s good 2-0 win over Panama in Seattle. They were guests in a private box containing head coach Jurgen Klinsmann’s wife and daughter, two of Les’s close professional colleagues and two basketball players. The victory put the Americans top of the Concacaf standings.

Monday, June 17: Read with interest the excellent Sheffield magazine ‘My Kind of Town’ containing a Bernard Shaw article I gave them some help on. The long-time Wolves full-back played on both sides of the divide in the Steel City and, along with a colour photo of him as a young United player, there’s a shot of him scoring for Wednesday from a free-kick in a 4-4 draw with Manchester United.