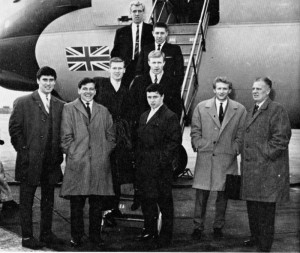 We are grateful to long-time East Midlands radio reporter Colin Slater for using his memoirs to provide an interesting slant on one of the lesser-known Wolves managers of the last half a century.

The octogenarian Radio Nottingham correspondent has covered well over 2,000 Notts County matches and reveals in his book how he played a part in tempting Andy Beattie to the world’s oldest football club soon after the Scot’s short stay at Molineux in the mid-1960s.

And he speaks fondly of a man who was not only Scotland’s first manager but one who became regarded soon after as a ‘trouble-shooter’ of his day.

Colin describes the Aberdeenshire-born former quarry-man as ‘a distinguished figure in the game’ and says in ‘Tied In Notts’: “I knew him slightly when he was manager of Huddersfield and we later became much closer when he managed Forest.

“He wrote a weekly column for the (Nottingham-based) Football News. These were not ‘ghosted’ but hand-written by Andy himself and delivered personally to the office in Parliament Street every week. I came to value both his ability and his integrity.”

County were in dire straits in the basement division when the author suggested they made a move to get him on board in 1965-66, not long after his Molineux stint had ended with a spectacular 9-3 defeat at Southampton.

Slater lived near him and added: “At around midnight, the board agreed I could approach him. This I did the following morning, on a personal visit to his home, when I outlined the extremely grave position to him.

“Beattie had already proved he enjoyed a fire-fighting role and quickly offered to work at Meadow Lane as an unpaid adviser. More than that, he agreed to ask his great friend Peter Doherty to join him, which he agreed to do.”

Beattie, having initially worked with manager Tim Coleman, then served alongside Jack Burkitt and Billy Gray before having a spell in charge himself in 1967. The Magpies provided his eighth and last managerial stop, the others being Barrow, Stockport, Huddersfield, Carlisle, Forest, Plymouth and Wolves.

He was in his early 50s when appointed at Molineux in succession to Stan Cullis in 1964 and was to die, aged 70, in 1983. Contrary to what has been stated in some publications (including this piece initially), he wasn’t responsible for the signing of Hugh McIlmoyle from Carlisle – the centre-forward who scored 45 goals in 105 games during his stay in the West Midlands. 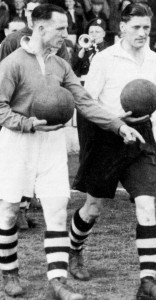 As a player, Beattie was an impressive full-back and won seven Scottish caps, plus several more in wartime and Victory internationals, in a career that was blighted by the outbreak of the Second World War. He played for Preston in the two finals immediately before Wolves were stunned by a 4-1 defeat against Portsmouth at Wembley in 1939 – a loss against Sunderland and a victory over Huddersfield.

When appointed as boss of Huddersfield, he is said to have nailed two lucky horseshoes to his office wall – and they appeared to have the desired effect.

Although he joined them too late in 1951-52 to stave off relegation, he brought them back at the first attempt as they included an 8–2 thrashing of Everton in their journey to a runners-up finish. And two past or future Wolves men, Laurie Kelly and Bill McGarry, were part of an entire defence who played in all 42 League fixtures on the promotion trail.

Once restored as a Division One side, Beattie’s Huddersfield acquitted themselves very well. They finished third in 1953-54, six points behind champions Wolves and two adrift of runners-up Albion.

He resigned at Leeds Road in 1956 following another relegation and was replaced by his assistant Bill Shankly, one of his pre-war Preston team-mates.

Beattie then embarked on an alternative career as a sub-postmaster in Preston, having also had two stints as Scottish boss. He scouted for various clubs during his later years after also being assistant manager to Sheffield United.