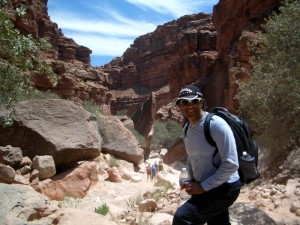 Don Goodman takes a well-earned pause for rest on the long descent.

Don Goodman is home and cherishing some memories of a lifetime after boosting a successful money-raising effort with a hike up and down the Grand Canyon.

The former Wolves striker was one of six former footballers in a group of over 30 who descended on Arizona for a series of challenges in support of the Children Today charity.

“I had never played alongside any of the other players who were participating, although I’m sure I played against them all at various times,” Goodman told us.

“I joined Wolves a couple of years after Dave Beasant’s spell there and actually signed for Sunderland as a replacement for Marco, who had made a big-money move to Crystal Palace, so it was a coincidence we were room-mates and tent-mates.

“We all got on famously over in America. It was a real fun trip. My friends and family will tell you I don’t have the greatest memory in the world and I wish I could recall more about certain parts of my football career. But I will remember this adventure for the rest of my life.

“The invitation to take part came through the PFA and I replied straightaway, saying how keen I was. We’re talking of one of the seven Wonders of the World after all – it’s basically a hole of nearly 300 miles in the Earth and of extreme natural beauty. I thought there may never be a better chance to go there.”

The eight-day trek raised more than £100,000 for Children Today, a Chester-based charity who help disabled children by improving the quality of their lives through the provision of wheelchairs and other equipment.

As well as hiking down the canyon, climbing back up it and camping en route, the group had to take on a number of challenges in the intense heat such as biking, river rafting and even coming up with a rap routine at the bottom.

“We were divided into six teams, each containing one footballer as their captain, and you can imagine that it was highly competitive with ex-players taking part,” said the Sky Sports summariser. 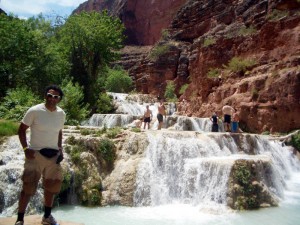 “Somehow, my team won the rap challenge, which was hilarious, but we finished second overall behind Marco’s team.”

More information about Children Today can be obtained by clicking on https://www.facebook.com/ChildrenTodayCT#!/ChildrenTodayCT – the link also carries blogs from the Grand Canyon adventure. Donations can be made at www.justgiving.co.uk/dongoodman