First Cab Off The Rank

Enduring Career Of Cast-Off With Place In Molineux History 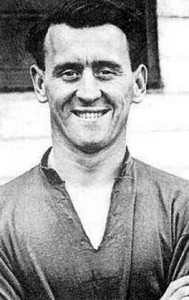 Ron Hewitt in one of his many guises.

So who was the first signing of the magnificent Stan Cullis era at Wolverhampton Wanderers?

Peter Broadbent? No. Ron Flowers? Not him either. Bill Slater? Nor him. Try Ron Hewitt.

We are again grateful to Steve Gordos for his historical expertise and research in informing us that the Sports Argus annual for 1949-50 contained Hewitt’s pen portrait on the Wolves pages.

It isn’t a name that immediately springs out at us from the annals of Molineux history but there is an interesting story to relate.

This unique place in the club’s history was conferred on him at a time when he was an amateur player in Flintshire and when Wolves were embarking on a rise that was to bring them three League Championship triumphs as well as further success in the FA Cup.

The annual says he established himself in the Molineux reserve team but, as has been said many times, even some very good players struggled to break into the first team in the Cullis era.

Hewitt was moved on fairly quickly but it is nice to report that he did not disappear, in the football sense, without trace.

Without playing in Wolves’ senior side, he joined Walsall, where he played nine matches in 1949-50 (all in the no 7 and 8 shirts) and scored twice – both in an eye-opening 5-1 victory at Ipswich in the November.

He subsequently went on to Darlington before eventually establishing himself as one of the all-time greats in Wrexham’s history. He finished as their top scorer in three of his six seasons there, totalling 83 goals in 204 League games and being selected for the Third Division North representative side in 1956-57. 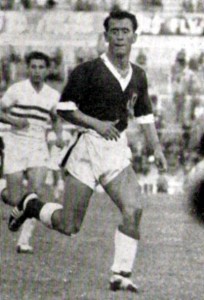 The player in action for Wales in the 1958 World Cup finals.

The princely sum of £7,000 took him south to Cardiff, where he had the mantel of being leading marksman in both of his seasons. And his impact stretched even further.

So well did he respond to the disappointment of becoming a Cullis cast-off that he was named in the Wales squad for the 1958 World Cup finals in Sweden and appeared there in three of the games his country played.

His trio of appearances included the 1-0 quarter-final defeat against Brazil in Gothenburg, where a side minus their injured star man John Charles ran the eventual champions close and lost only to a goal by Pele.

Perhaps, surprisingly, having appeared at inside-right in the last of the group games – a 0-0 draw with the hosts in Stockholm – and the group play-off against Hungary as well as the last-eight tie, he didn’t win another cap.

Hewitt, who was born in Flint in June, 1928, returned to Wrexham for another year and had spells at Coventry and Chester before embarking on a long career in the non-League game. 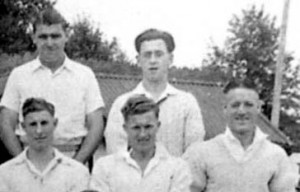 Alongside the towering Angus McLean (back row) and a keen exponent of the summer game, too......

It seems he was also a decent cricketer. The Black Country Bugle annual shows a picture of him among the Wolves players when the FA Cup was taken along to Wombourne for their annual match in 1949.

And there is also a family link in football in more recent generations. He was an uncle of Everton coach Andy Holden, who also played once for Wales in a career spent with the likes of Chester, Wigan and Oldham.