A Change Of Course For Breast Cancer Fund-Raiser 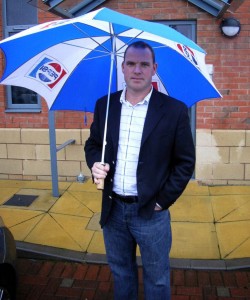 It's not pink but Jon Purdie's accessory would not look out of place on the golf course.

A Wolves-themed charity golf day next month has proved such a draw that it has been moved to cater for bigger numbers.

And others have been sounded out to appear in support of breast cancer charities after organiser Jason Guy’s partner Lucy was diagnosed with the disease.

The day was to have been staged at Oxley Park but has been switched to Astbury Hall, the course created by Judas Priest lead guitarist and founder member K K Downing.

Proceeds will be distributed between various local and national breast cancer charities and West Park Rehabilitation Hospital, which cared for Jason’s sister following a stroke at the age of 39.

“There are individual and team places still available, plus the chance for people to just come and join us in the evening for a sit-down meal and entertainment at £20 per head,” he said.

“We’re aiming to raise £5,000 all told and have a pink theme for the day, as well as a Wolves one. We’ll be providing pink polo shirts for players to play in but if they can wear something of that colour at night, so much the better.

“There will be bacon rolls and tea/coffee for when the players turn up at around 10am and a shot-gun start at 12 noon. Each competitor will also receive a goodie bag, be included in various competitions and have access to a free beer tent.

“The event has generated phenomenal interest. We’re delighted with the response. Now we just look forard to selling the last couple of teams and to having a great day.” 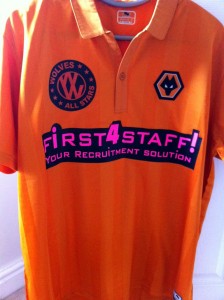 What the well-dressed former Wolves players will soon be wearing......

Jason’s involvement among the Wolves fraternity is by no means limited to this golf day. He is also the chairman of Jody Craddock’s forthcoming testimonial year and is busy with the Wolves All Stars, for whom he has secured shirt sponsorship.

The side have a new emerging website at www.wolvesallstars.co.uk and hope to announce fixtures soon for later this year.

The link to the breast cancer fund-raising effort is www.justgiving.com/jason-guy with Jason contactable on 07753-446983.