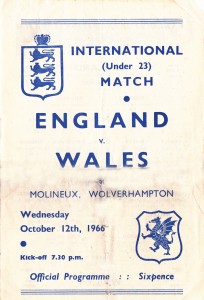 The front cover that greeted the Molineux masses.

“There have been full international matches, Inter-League games and youth internationals and now we are completing the set,” wrote ‘Wanderer’ in the match programme on Wednesday, October 12, 1966.

Elsewhere in the eight-page publication, Ivan Sharpe hailed the under-23 game between England and Wales at Molineux as ‘the beginning of England’s campaign to retain the highly-prized World Cup; the first milestone on the journey to Mexico 1970.’

This was not only the first match at this level ever staged at Molineux. It was also the first international played since England’s historic 4-2 victory over West Germany two and a half months earlier, the seniors’ triumphant return to action coming ten days later with a 2-0 win away to Northern Ireland on October 22.

Starting in Belfast, Alf Ramsey fielded his World Cup final team in each of the next three games but the battle for positions amid the defence of football’s ultimate prize started in Wolverhampton. And a home hero was at the forefront.

Bobby Thomson was surprisingly dropped in favour of Ken Knighton for Wolves’ League games (against Portsmouth and Hull) either side of the international date but a couple of pull-outs meant he was named as under-23 skipper, albeit in the right-back role rather than the no 3 slot he was more familiar with at Molineux.

He already had 13 under-23 caps to go with the eight he had won at senior level – all of the latter blue-riband variety coming before he turned 21.

Others were not so fortunate. Chelsea’s Peter Osgood was ruled out with a broken leg suffered in a League Cup tie at Blackpool, Sheffield United’s Alan Birchenall was also unfit and Martin Chivers was needed by Southampton for a cup replay at Carlisle, so Allan Clarke (Fulham), Jon Sammels (Arsenal) and David Ford (Sheffield Wednesday) stepped in for their debuts.

Both teams stopped over in Wolverhampton to prepare and there was a special thrill for the younger members on or beneath the fringes of Ronnie Allen’s first-team squad. Ramsey took his players along to Castlecroft for a training game against them, the likes of Phil Parkes, Les Wilson, Alun Evans and John Farrington being photographed while addressed by the man who was to become a knight. But there was a down-turn to the exercise, with Sunderland keeper Jim Montgomery injuring his shoulder and Stoke’s John Farmer having to be summoned as a replacement.

The England lads also went to watch Walsall’s Third Division home match against Gillingham on the Tuesday night and found themselves up against Welsh counterparts who included John Toshack, Albion’s debutant winger Dick Krzywicki and Wrexham’s Mick Evans, who had been on Wolves’ books until the previous summer.

In the event, the stand-in was rarely threatened as England won at a stroll in front of Molineux’s second biggest crowd of the season, the 21,063 bring bettered only by the visit of Birmingham on the opening day.

The night was a personal triumph for Clarke, who scored four times and, in the words of Phil Morgan in the Express & star, produced a performance that ‘ranked with one by the inimitable Nat Lofthouse for the Football League in the last but one international representative match at the ground.’

Even Cyril Knowles got in on the scoring act and Thomson himself nearly did. Knowles also won a penalty. The other goals came from John Hollins (2) and Ralph Coates, whose effort was the best of the night.

The collection of Davises, Davieses and Joneses in the Welsh ranks were no match but the follow-on for England wasn’t all that it might have been.

Only Clarke from that side went on to play in Mexico in the 1970 World Cup and many, including centre-half Alan Stephenson, who had played at Molineux for Crystal Palace earlier in 1966-67, fell by the international wayside. 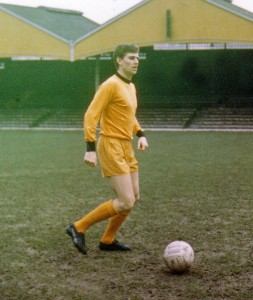 * Wanderer also reported that, since under-23 matches started (against Italy in Bologna in 1954), Wolves had supplied 11 players for the side: Peter Broadbent (in that first one), Colin Booth, Ted Farmer, Ron Flowers, Gerry Harris, Alan Hinton, Ernie Hunt, Johnny Kirkham, Gerry Mannion, Jimmy Murray and Bobby Thomson, whose tally of caps outstripped all the others.