Oh Brother! Where Did You Go? 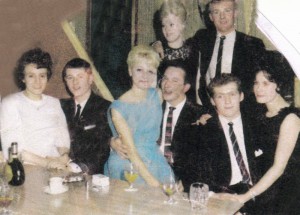 We at Wolves Heroes had good reason to be grateful to John Doughty for his memories and contacts early last summer – and promised to give a further insight into his astonishing recall of Molineux matters.

Well, our spotlight three days ago on the England v Wales under-23 international at Molineux in 1966 gives us the perfect springboard to do so now, some 14 months on from when John and his wife Jackie opened the doors of their home in Codsall for the 50th anniversary reunion of Wolves’ 1962 FA Youth Cup final team.

John was himself a member of that squad, although his participation was confined to the earlier rounds rather than the two-leg final against Newcastle, and astonished those present with his stories from the time.

Now, we thank him for letting us in on the brief Wolves lives of two youngsters of that era who the club came to bitterly reject letting go. Both came back to haunt them many times over.

Allan Clarke, an older brother of Derek and Wayne, who both served at Molineux, was born just down the road in Short Heath, Willenhall, and went on to become an FA Cup final goalscorer and Football League and European Fairs Cup champion with Leeds. He also won 19 England caps, including at the 1970 World Cup finals in Mexico.

And Wolves could have had him for nothing…..ouch!

“Allan was playing for South East Staffs juniors and trained with Wolves on a Thursday night,” John said. “He came down as a schools player at Castlecroft and I remember him being at Molineux as a trialist.

“He would have been training under the likes of Dave Lapworth, who was from Plymouth and in his 90s when he died about five years ago, and Alf Crook. Dave had been on the books of Albion as well as Wolves.

“As we know, Allan never signed for Wolves and went instead to Walsall, where he thought he had a better chance of making it. He played there with a good friend of mine, Graham Newton, who had also been a lad at Wolves.

“I signed for Walsall afterwards as well and played with Allan in 1962-63 in what we called the public practice match, when I found myself marking Newty!”

Leeds caused Wolves much grief in the early and mid-1970s, despite the notorious title decider at Molineux in 1972, an FA Cup semi-final defeat at Maine Road underlining the pain Don Revie’s side handed them at the time.

If there was one team back then who spelled more heartbreak for Bill McGarry’s men, though, it was Tottenham. And that’s where our other ‘one that got away’ comes in.

“When Peter Knowles came here, his older brother Cyril came as well as a trialist,” Doughty added. “He was part of the Mark Crook era at Wath Wanderers and came down as a left-winger or left-back and played in a couple of Worcestershire Combination games as an amateur.

“But he went back to Yorkshire, signed for Middlesbrough and then went on to be a big star at Tottenham and even play a few times for England.

“About eight years ago, Peter gave me a signed photo of he and Cyril shaking hands in the centre circle before a Wolves v Tottenham game. He had nothing from his career by way of souvenirs but I found a good home for the picture. Our son-in-law’s mother is a big Wolves fan who used to idolise Peter, so I gave it to her.  Her brother was fond of him as well.” 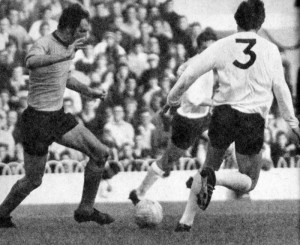 Cyril Knowles closes in on Derek Dougan during a Wolves visit to White Hart Lane.

Our piece on Monday revealed how the debutant Clarke was the four-goal hero of England’s hammering of the Welsh under-23s in Wolverhampton 47 years ago – an 8-0 victory to which Cyril Knowles also contributed a goal.

But that was just the start of the duo’s international impact, with Knowles going on to win four caps, all of them in 1967-68. He was also part of the Spurs side who narrowly beat Wolves both in the 1972 UEFA Cup final and the semi-final of the League Cup the following year.

Before his tragic death in 1991 from a brain illness, Cyril also hurt Wolves as a manager when his Torquay side pulled off an unlikely rescue act at Molineux to deny Wolves what seemed an inevitable return to Wembley in the Sherpa Van Trophy.