Time For A Nice Family Film! 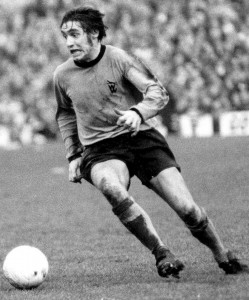 Monday, June 24: Met Don Goodman at a golf day at Walsall and perhaps didn’t have quite as much to say to him as I might usually have done. We had a long chat over the weekend due to us posting a substantial piece about him and his charity trek round the Grand Canyon. With his personality, it’s not difficult to see why he has got on in his media career. He’s a real ‘people person.’

Wednesday, June 26: Received a phone call from Les Wilson in Canada saying how thrilled he was with the dvd I sent him containing the extended Wolves v Manchester United highlights from August, 1969. Black and white the film may have been, but he was chuffed to see himself taking on the Bests, Charltons and Laws – and helping keep them fairly quiet in a 0-0 draw. Les said he had one of his daughters, his young grandson and other members of the family over at his house and his mother had just celebrated her 92nd birthday. She was taken downstairs to the special sports TV room and shown the footage. “It was the first time she has seen me play against United – and the first time Tanya had ever seen me play, as well as my wife Lois,” Les said. “Words cannot thank you and Paul Walker enough for sending this dvd for me and my family.”

Thursday, June 27: Met up with Peter Eastoe outside his workplace in Halesowen, so I could get a couple of photographs signed by him for a friend – one of him playing for Swindon and one playing for QPR. Had a nice chat with him in the car park and was interested to hear him say he could have joined Oxford from Molineux. He was known to the former Wolves coach Gerry Summers, who was manager then at Oxford. He opted instead for Swindon, though, and scored two goals at home to Carlisle on his debut. Unfortunately, he fractured his cheekbone in the same game and was sent back to Wolves to recover.

Sunday, June 30: Sat opposite to Derek Parkin and his partner Christine at the cricket day at St Georges in tribute to Jim Heath. Got him to sign some photos for a Huddersfield fan who had contacted us many months ago. Good also to see Phil Parkes and Mel Eves there on opposite sides of the boundary, plus several members of Jim’s good friends from the Wolves fraternity,

Wednesday, July 3: Have been exchanging various emails with Stephen Mill, who said he was writing an article for the forthcoming East Fife v Wolves programme and wondered whether we had heard of George Aitken and Davie Duncan. Both were reportedly briefly on Wolves’ staff in the early 1940s. Couldn’t find anything about them in the record books so referred them to the historians at Molineux. Both players appeared later for Scotland and seem to have been targeted by a Wolves scout in Fife. The only man who appears to have played for both clubs is Evan Williams, the 1960s Wolves keeper who had two games for the Fifers as a trialist in March 1964.

Saturday, July 13: Was delighted to hear that Ray Aggio and Fred Kemp had met up in London recently and so extended the friendship that was rekindled by the reunion last summer of Wolves’ 1962 FA Youth Cup final squad. Ray is obviously keen on a little reminiscing. He has also been with his partner to stay with Lois and Les Wilson in Vancouver. 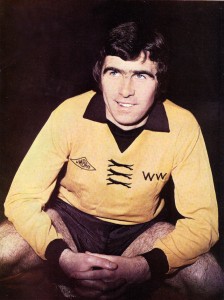 Bobby Gould during the second of his two Wolves spells.

Wednesday, July 17: Rang Bobby Gould at home and spoke about the passing of a mutual friend. Was glad to hear that Bobby is still playing cricket – and going to midweek nets – at the age of 67; also that his late-teens grandson is doing well as he tries to make his way in football. Keep an eye out for the Gould name in the future!

Friday, July 19: Revived another link with last year’s Youth Cup reunion dinner when I met former Wolves youngster John Southall for a coffee in Wolverhampton city centre. He had been fascinated to read on here that Allan Clarke was briefly part of the Molineux landscape at about the same time as he was. John was with his good friend Brian Daniels, who is a walking example of how the worries of the present-day Wolves are weighing heavily!