Cooke-ing Up A Super Italian!

A Molineux Appearance Under The Radar For Lazio Great 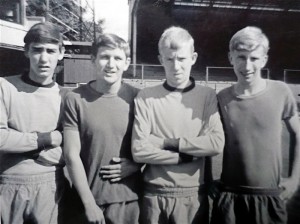 In the annals of famous players that Wolves heroes have faced at club level during or after their Molineux stints, we can include the likes of Pele and Beckenbauer (from the American league), stars of the pioneer floodlit days such as Puskas and Di Stefano and men like Best, Moore, Greaves and Charlton from domestic combat.

But those worldly Wanderers of the 1960s and 1970s, who faced Haller, Capello and others in European competition, can make a surprise addition to their lists – of a hero who actually played at Molineux twice.

Wikipedia tells us that Georgio Chinaglia was an Italian footballer and one who went on to score 11 times in only 14 internationals for his country.

Indeed, he was so prolific that he retired in 1983 as the NASL’s all-time leading marksman with 243 goals, having won four league titles with New York Cosmos as a team-mate of Pele, Beckenbauer and others.

But that superb encyclopedia of a website also points out that he was brought up in Cardiff after being born in the similarly named Carrara, and it’s those Welsh links that came to explain how he came to be facing Wolves the first time.

Thanks to the efforts of our friends across the Atlantic, we have been able to pinpoint that  Chinaglia was among the Davieses, Davises, Bowens, Beavons and Thomases in a Swansea team who were well beaten in a 1964-65 age-group game by the cubs Stan Cullis left behind.

The match resulted in a 4-1 last-16 victory for Wolves and was described by Phil Morgan in the Express & Star as ‘another of those refreshing, exuberant FA Youth Cup ties at Molineux.’

Gordon Roberts hurt his fellow Welshmen by scoring the first and third goals, with Geoff Thomas (no relation) pulling one back after Bob Hatton had also got in on the act.

But special mention was made by the veteran E & S correspondent of the last goal, which was scored by the little-known David Cooke.

He was described as ‘one of the most polished performers on the field’ and the platitudes continued: “He was so efficient indeed that, in the second half, Swansea shifted their strong-man right-winger Giorgio Chinaglia to the middle to escape Cooke’s dominance.”

Hang on, did we describe the West Midlands-born left-back as ‘little-known?’ In the playing sense, Cooke may be but he is still earning a living – at Premier League level no less – almost 50 years on.

With the help of his former Molineux colleagues, we have tracked him down and already spoken to him at length this year. We will be presenting his story on here in the coming weeks.

For now, we will round off by outlining how Chinaglia’s path also crossed that of Wolves again just before he was taken to the 1970 World Cup in Mexico – not as a fully-fledged member of the squad who were to reach the final against Brazil but for experience in anticipation of becoming a great himself.

Indeed, he was in the party who went to West Germany four years later and in the meantime skipped past Bobby Moore and provided the 86th minute cross from which Capello infamously touched home the Italians’ winner against England at Wembley in 1973.

And he was named in 2000 as the greatest player of all time at Lazio – the side with whom he was back at Molineux for an Anglo Italian Cup game at the end of 1969-70.

Wolves won that game with a Mike Bailey goal in front of a crowd of just under 12,000 but Chinaglia, who scored 98 times in 209 games for the Rome-based club, played a significant part in the return 12 days later when he forced Phil Parkes to race from his area and concede the free-kick from which the Italians opened the scoring in their 2-0 victory.

The result was decisive. Although Bill McGarry’s team had won their opening three games in the tournament, the defeat put them out.

The Youth Cup journey in 1964-65 didn’t run much further either. The clipping of Swansea’s wings put Wolves through to a last-eight tie at home to Chelsea, who were represented at the earlier 4-1 home win at Molineux by Tommy Docherty and his fellow spies Tommy Harmer and Frank Blunstone. And the Londoners, whose 1960s success was based on their outstanding youth policy, duly prevailed. 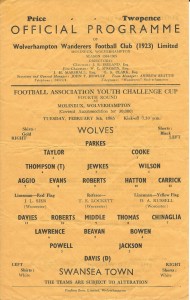 We can nevertheless see from the line-up below that there was no shortage of players who came through successfully to first-team level.