Lofty Back With Old Vancouver Pal 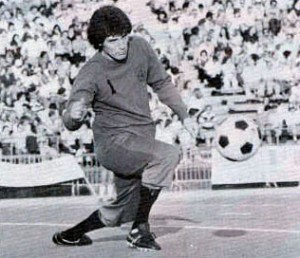 Phil Parkes as Canadian and American audiences got to know him.

Phil Parkes has endured a friendly chorus of disapproval while catching up for the first time in more than 30 years with a mate from across the Black Country divide.

The West Bromwich-born keeper was at this week’s Frank Skinner night at Birmingham Town Hall – the latest money-raiser for the Three Degrees Statue that’s due to be unveiled next summer in tribute to the Albion trio of Laurie Cunningham, Cyrille Regis and Brendon Batson.

Regis and another latter-day Wolves man Alistair Robertson were among those on stage at different times but Lofty had a personal reason to be there.

“I played with Willie Johnston at Vancouver Whitecaps and was his room-mate for a while,” he said. “I spoke to him on the phone some time back and we said it was time we met.

“I was going to visit him on the East coast of Scotland, where he lives, then he told me he was coming down for this do. So I popped along to see him in Birmingham instead and we went out afterwards for a bite to eat.

“To be fair, he received the biggest cheer of the night when he walked on the stage. He was obviously a legend at the Albion.”

Parkes and the former Rangers winger were opponents in two Black Country derbies in the 1970s – a 2-0 home win at Molineux just before Albion’s relegation in 1973 and a 2-2 Hawthorns draw early in 1977-78 – but didn’t know each other in English football.

They then linked up on Canada’s west coast at the end of that decade at a club with a deep Molineux connection. Alan Hinton and then Bob McNab were assistants to coach Tony Waiters, with Les Wilson as staff coach and team administrator.

And Lofty and Johnston were celebrating together when the Whitecaps became Soccer Bowl champions in 1979 in addition to winning the Western Conference and National Conference.

“They were great times,” added Parkes, who had toured America at length with Wolves in 1967, 1969 and 1972 and went on to play for Chicago Sting after Vancouver.

“The Whitecaps were able to pull in some good players from here like Alan Ball, Roger Kenyon, John Craven, Kevin Hector, Trevor Whymark and Ray Lewington, who was on loan from Chelsea.

“I usually shared a room with John Craven but he sustained a bad injury, so I linked up with Willie. I know he has a reputation for doing crazy things and getting sent off but he was quiet off the field. Like me, he doesn’t drive and you wouldn’t usually know he’s there when he’s having a beer.

“We lived in the same apartment block and used to take it in turns putting on a bit of a dinner party because our wives were with us. One of our sons was born over there, in fact.

“But the audience the other night were reminded how Willie became a bit of a demon when he crossed that line. He told the story of how he once had a rollocking from Johnny Giles for buying a greenhouse while he took a corner at The Hawthorns. 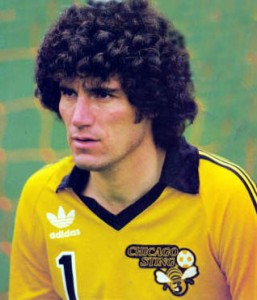 ....and after the move to Chicago.

“With the Whitecaps once wher we were playing away to San Jose Earthquakes, he was handed a can of Budweiser by a spectator while he prepared to take a set-piece and knocked it back before crossing for one of our lads to score.”

Hinton and Wilson may also remember the time Johnston – sent off an incredible 17 times and sent home in disgrace from the 1978 World Cup finals in Argentina – dropped his shorts and ‘mooned’ in the direction of the opposing Seattle Sounders camp.

Parkes’s presence in the packed audience on Wednesday was announced when Tony Brown spoke of the time he punched in a goal during a 3-3 draw at Molineux just after Wolves’ return to the top flight in 1967.