Roaring Off In Third…….

Glory Or Bust For Wolves In Past Seasons At This Level 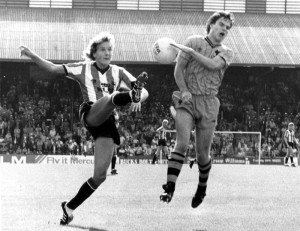 Wolves in Third Division action at Brentford on the first day of 1985-86.

Wolves have no comprehension of what life is like in the middle of the third tier of English football. They just don’t do so-so seasons at this level.

Either they crash straight through it (downwards!) or, more often and hopefully much more likely, they spring back by winning it. And so to the big kick-off at Deepdale on Saturday…….

The last time the club kicked off a campaign at this level was across Lancashire at Bury on a Saturday lunchtime in August, 1988. The time before that, three years earlier, their programme began at Brentford.

Both curtain-raisers brought defeats, 2-1 at Griffin Park, where Wolves this time travel in late February, and 3-1 at Gigg Lane, where Graham Turner was moved to sound a loud ‘buck-up-or-else’warning afterwards to the Fourth Division Sherpa Van Trophy winners of a few weeks earlier.

Selection wise, Wolves will be more Brentford than Bury this weekend. There are likely to be a sprinkling of League debutants, in gold and black at least, just as Sammy Chapman decreed there would be with the blooding of Nicky Clarke, Johnny Morrissey, Neil Edwards, Jon Purdie and Steve Stoutt in 1985-86.

At Bury, there were no new faces. In fact, nine of the victorious line-up from the game against Burnley at the twin towers were again involved. The only absentees were the released Micky Holmes and injured Keith Downing, their places going to Phil Chard, who was ineligible for the Sherpa Van games, and one of the used Wembley substitutes, Nigel Vaughan.

Few fans will need reminding that Turner’s men quickly pulled round that shaky start and went on to win the Third Division title emphatically.

It was the same story in 1923-24, when the club competed in the Third Division North and emerged as champions by a point from Rochdale, with their opening-day opponents Chesterfield finishing third. 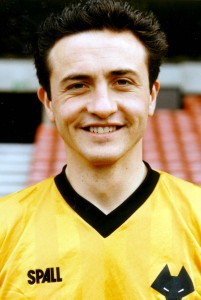 Phil Chard - on parade at Bury on kick-off day in 1988 after being unable to play at Wembley.

Among Wolves’ more eye-catching results then was a 5-1 home victory over New Brighton, no less, and a 7-1 New Year romp at Ashington, where Tom Phillipson scored a hat-trick.

And they are the only three seasons to date in which Wolves have competed at this level. They will therefore make history if they are neither promoted nor relegated this time.

In this rare piece of commentary on the present, we at Wolves Heroes wish Kenny Jackett and his revamped side all the very best in their quest to climb out of the division at the first opportunity.