How’s This For Starters?

Kick-off Days With A Difference 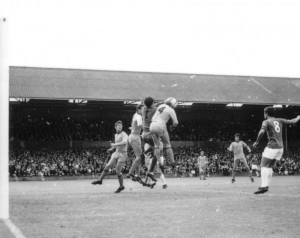 Phil Parkes and no 4 Mike Bailey help repel an Ipswich attack at Portman Road on the first day of 1968-69.

With the start of 2013-14 almost upon us, we reflect on the dawn of seasons past, complete with some strange tales, sequences and observations.

* Never before have Wolves played a start-of-season League game as early as August 3 (the date of Saturday’s visit to Preston). Their previous earliest date for the big kick-off was in 2006, when they drew 1-1 at Plymouth on August 5 in Mick McCarthy’s first competitive match in charge.

* Until 1919-20, the League season always started in September. Even when August became the month for domestic football to resume, the opening afternoon’s fixtures were always in the second half of the month until 1968-69. That year, Wolves went into action by playing at Bill McGarry’s newly-promoted Ipswich on August 10.

* The League marathon hasn’t always accounted for the start of a season. As well as Wolves’ various Charity Shield appearances, they preceded their top-flight programme by winning at Arsenal in 1973 in a play-off for third and fourth place in the previous season’s FA Cup and edged past Aldershot last August when the Capital One Cup campaign kicked off before the Championship did.

* Wolves have become slow starters in recent years. Only twice in the last ten seasons have they won on the League’s opening day, losing five and drawing three of the others. In the ten years prior to that, they began brilliantly by winning six times and drawing four.

* Robbie Keane must have hated the close season. As a Wolves player, he used to come roaring out of the traps and scored twice on his debut in the 2-0 win at Norwich that launched the 1997-98 campaign. Twelve months later, he and Keith Curle netted in a victory at home to Tranmere and shortly before his departure early in 1999-2000, the Irish sensation hit the only goal of the first-day game against Manchester City at Maine Road.

* Wolves brought the house down – or the woodwork at the North Bank End at least – when they beat Norwich 3-1 on the first day of 1973-74. In racing back unsuccessfully to try to keep out a lob from Derek Dougan, visiting keeper Kevin Keelan got in such a tangle that he found himself surrounded by net. A 16-minute delay ensued while repairs were effected. 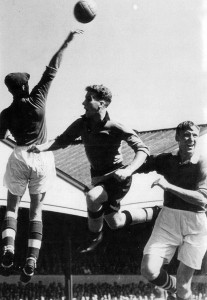 Roy Swinbourne challenges on the 1952 afternoon on which the curtain went up at Molineux with a 1-0 win over Cardiff.

* How miserable must this have been? Wolves didn’t have a game during kick-off weekend in August, 1979. A little extra time was needed for completion of the new John Ireland Stand, so the visit of Liverpool was postponed and John Barnwell’s League Cup winners elect, complete with new signing Emlyn Hughes, went into action for the first time in the following midweek, when they won 1-0 at Derby.

* Deepdale, where Wolves had played on a controversial plastic pitch in 1986-87, is also where Keith Downing ran out in a blond wig before a 3-3 draw in May, 1989. It was the first game after Graham Turner’s team had been crowned Third Division champions.

* Keep an eye on the new men in Wolves’ side against Preston. Since the turn of the century, various players have used the first fixture in a season to mark their debuts for the club with goals, namely Temuri Ketsbaia, Shaun Newton, Steffen Iversen, Sam Vokes and Steven Fletcher.