Much-loved Winger Who Lived To The Full 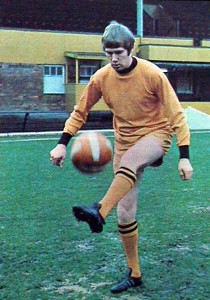 It’s at times like this that you are thankful for how much can be squeezed into a life.

When asked in a BBC WM interview 18 months ago about the passing of his good childhood friend Davy Jones, of Monkees fame, Dave Wagstaffe spoke warmly but with apparent freedom from emotion by summing up: “He had a good life.”

We can say much the same now as the dust settles on the news we had feared hearing for several weeks; that Wolverhampton Wanderers’ best and best-loved winger since the halcyon days of Hancocks and Mullen had been taken from us at the age of 70.

In materialist terms, Waggy probably didn’t have a lot but he had a contentment and memories that money can’t buy – and he did loads with his time.

His 404 League and cup games for Wolves and his top-15 place in their all-time appearance makers list tell only part of the story. Some half a century on, he remained newsworthy without seeking to and had a lovely way of telling his stories.

Not long ago, he encountered the Queen on holiday in Scotland, then he took surprise delivery of a copy of Bert Trautmann’s autobiography, sent by the German legend himself. The winger’s career of 161 games at City unfolded either side of a role in the keeper’s testimonial game against Manchester United in front of 48,000.

There was also an appearance on Radio 5 Live prior to a City v Wolves Premier League game and the book he has drafted in tribute to another member of that formidable 1970s side, Frank Munro. Oh, and his starring role on the club’s Official History dvd nearly a decade ago.

Waggy was as nervous as a kitten when he reported to Molineux to be interviewed but was outstanding in front of the camera; not just with his on-pitch memories but his perception in recognising in the sensational Peter Knowles story that a man who had broken tens of thousands of hearts had crucially found peace in his own.

Sadly, time constraints saw to it that the tale of how he was sent home from Ipswich for a mid-1960s misdemeanour that was actually down to the more mischievous Knowles landed on the cutting room floor.

But Waggy’s autobiography of 2008 does justice to his own magnificent deeds and off-field scrapes. Here was a rare crowd pleaser; a brilliant sight in flight on the left wing and a man capable of providing a precision service to John Richards and, in particular, Derek Dougan.

He played 48 games out of 48 in the 1966-67 promotion season, then revelled in the Californian summer that followed, his reunion with Davy Jones living up to Waggy’s high anecdote standards. He neared ever-present status in three other seasons as well.

At The Hawthorns in March, 1971, he took a terrible toll on Albion’s stand-in right-back John Kaye and did much to inspire Wolves to a 4-2 victory. He didn’t score that day – he generally left that role to others – but, when his goals did come, they were often special.

The long-range beauty in the snow against Arsenal was his favourite but the shot he flashed past Pat Jennings in the second leg of the UEFA Cup final at White Hart Lane was another example of how hard and true he could strike a ball.

He was disappointed that an injury – bizarrely attributed to Bill McGarry’s temper and then hidden from the manager so he wouldn’t leave him out – prevented him playing to his best in the 1974 League Cup final against his former club. By then, the years were catching up with him and he was already ten years into his Molineux stay.

Dougan was one of many who felt aggrieved that Wagstaffe had not followed up his English Youth and Football League X1 recognition by being capped at full international level. The eloquent spokesman blamed McGarry for promoting Mike Bailey’s claims instead but Sir Alf Ramsey’s wing-less philosophy was the real reason for the boycott.

Waggy, in his enduring Mancunian and slightly husky tones, was much less vocal but pleased as punch when inducted last winter into Molineux’s Hall of Fame. He was beaming that night. Thank goodness the honour came before the heart problems that sent the first shockwaves round the Wolves fraternity in late May.

Les Wilson immediately sent us an email wishing ‘the wonderful footballer Dave Wagstaffe a speedy recovery.’ In a similar message, Barry Powell called him ‘the best winger I had the privilege of playing with.’

The diagnosis of his cancer, this time not made public, followed in June, then came the appalling whispers that his chemotherapy was to be discontinued.

Waggy was always good company. John Lalley and I sat enthralled by him in a Wednesfield pub one teatime many years ago and I visited him at one flat he had in Bloxwich and then several times at the one he and his partner Val had at Tettenhall, although their barking dog ensured few callers made it through the door!

My look at his signed Trautmann book actually occured at his nearby allotment. Mmmm, pruning the roses, weekends away at the caravan in Lancaster……football is all sex and drugs and rock and roll, isn’t it? 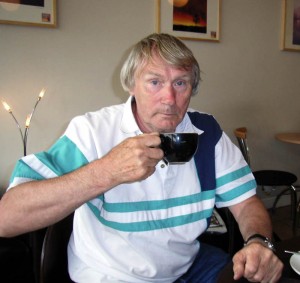 Is that a free cuppa?

He was known to like a pint and that pre-match fag (‘Rolled Gold’ was an excellent choice of headline on the Backpass feature about him) and he had plenty of other quirks, like a need to sit on the end of rows at the cinema or even on a team photo.

But, boy, could he play and was he loved! That Backpass piece was partly put together in a Tettenhall coffee shop, the owner of which raced over with free refills for us when he realised who he had in his midst.

He wasn’t the only one in awe of the cherished no 11. The last time Waggy and I met was in the company of author Steve Gordos in the Gluttons For Nourishment establishment in the same village. This time, a woman in her 60s or 70s recognised him, approached him and, with a crucial survival battle at Barnsley looming for Wolves that night, urged him to get his boots out again. You know, I’m not even sure she was joking.