Wilshaw Was Frustrated By News Black-Out 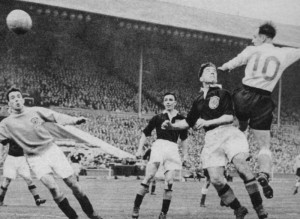 Dennis Wilshaw nets on his way to his famous four-goal rout of Scotland.

Steve Bull’s unforgettable debut goal for England at Hampden Park is captured amply in photographs, print and on film – and triggered Rob Bishop’s writing of the ‘Backstreet International’ book about him that was published in 1989-90.

Rather harder to find are cuttings celebrating the astonishing feat of another Wolves forward when Scotland headed south to face the Auld Enemy in a famous staging of the fixture that is revived at Wembley tomorrow night.

Dennis Wilshaw remains the only man to ever score four goals in a full England-Scotland international, his heroics coming in a 7-2 home victory in April, 1955, in which Nat Lofthouse (2) and Don Revie were also on target.

More than three minutes of decent footage of the game can be seen at http://www.youtube.com/watch?v=JUxdNLEpNQE but Dennis always regretted the fact that his scrapbooks lacked much printed record of his dream afternoon.

A month-long strike by maintenance workers, who were seeking a rise of just over £2 a week, saw to it that there were no national newspapers in England at the time except for The Guardian, which was printed in Manchester.

We are grateful to Steve Gordos for sending us the relevant page from the Glasgow Herald and for much of the background information here to what was truly a momentous occasion.

Wilshaw needed only 60 seconds to open the Wembley scoring and was responsible for all his side’s goals in the second half after they had pulled 4-1 clear at the interval. Tommy Docherty brilliantly struck one of the Scots’ consolation goals, although it was from a free-kick about 30 yards out and not from the 60-yard range to which the commentator excitedly referred!

Other big events the newspapers missed included the resignation of Sir Winston Churchill, the Budget and the announcement of a General Election. American papers such as the New York Times were flown in to help fill the gap but WH Smith station stalls reported a run on paperback novels and magazines.

The Express & Star was publishing as normal but treated the game in a low-key way as it was played on a Saturday as the League Championship battle between Wolves and Chelsea entered its final month.

And the backcloth to the international game puts into perspective the grumbles of Premier League managers who may be unhappy at losing players this week to friendlies for their countries.

On a day when Duncan Edwards made his England debut, Stan Cullis lost no fewer than three star men to what was then seen as a much bigger stage – Wilshaw, Bert Williams and Billy Wright, the latter captaining the team for the 50th time.

And there might well have been a fourth. The ‘England v Scotland’ book by Brian James reveals that Walter Winterbottom also rang Cullis for Bill Slater and was told: “Crikey, Walter. What are you trying to do to me? You’ve already got Williams, Wright and Wilshaw and I’ve got a League match to play.”

Ironically, the England manager subsequently called Wolves’ arch rivals Chelsea to request the services of Ken Armstrong at right-half and apparently had their manager Ted Drake in tears when he did so.

“With Frank Blunstone already out of their team to play for England, I knew I was asking a lot,” Winterbottom is quoted as saying. “But Ted didn’t want to rob Armstrong of a cap (it was his only cap as it happened, although he later emigrated to New Zealand and played 13 times for them), so he agreed. 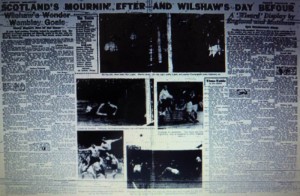 How the heroics were covered north of the border......

“I must say that apart from England’s performance that Saturday, I was relieved to see that Chelsea won. I would have felt terrible had they lost because of what I had to do to them.”

Mmmm, no such sentiments were expressed to Wolves, who drew 1-1 at home to Preston on George Showell’s debut and fell four points short in their efforts to retain their title.

As for Dennis Wilshaw, he may have been short on keepsakes but at least he kept his shirt this time. When he scored twice against Wales on his debut, he was dropped for the next game. After slaying the Scots, he remained in the side for the away matches against France, Spain and Portugal that spring, although he didn’t score in any of them.