Cooking Up Some Memories 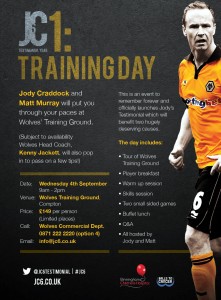 Tuesday, July 23: Met up after a gap of 12 years or so with Paul Cook and agreed with him that the last time we had been together was probably when he scored a long-range winner against Wolves at Stockport. He’s now Chesterfield’s manager and kindly provided not only a match ticket for our good mutual friend Gwilym Machin for tonight’s friendly against Wolves but also passes for us to one of the posh guest rooms at their nice new ground. Gwilym, who had driven down from Glasgow, was well chuffed also to have 15 minutes’ chatting time with Kenny Jackett in the tunnel area during the warm-up. We were both impressed by him. Paul pointed out his goalkeeper coach before kick-off…..one Eric Nixon. What did surprise me was that Cooky said he had not long ago learned of Mark Kendall’s death.

Tuesday, July 30: Received an email from the chairman of Jody Craddock’s testimonial committee offering a day with a difference – the chance to be tutored by Jody and Matt Murray (hopefully with a bit of Kenny Jackett input as well) on a five-hour visit to Wolves’ training ground. The price of £149 includes breakfast, warm-up, skills session, two small-sided games, buffet lunch, a question-and-answer interlude and a tour of the club’s Compton base. Anyone interested should email info@jc6.co.uk or phone 0871-222-2220. A reminder also: Wednesday, August 21 is the day for the charity golf day, also being organised by Jason Guy, at Astbury Hall. Please contact us for details.

Saturday, August 3: Had an interesting chat with a Dutch journalist I met on an overnight trip to take in the games in Holland between Den Haag and PSV Eindhoven, and Utrecht v Go Ahead Eagles. Joop Niezen played briefly in the 1950s for Den Haag in the days when they were housed at the ground at which Wolves won in their goal-filled run to the 1971-72 UEFA Cup final. What’s more, he recalled meeting Bert Williams when he was among the 52,000 crowd as Stan Cullis’s side drew 2-2 with a Dutch X1 in a prestige friendly in Rotterdam in 1952. Bert remains something of a hero to him.

Tuesday, August 6: Was in Durham – courtesy of a totally unexpected call from the Daily Mail to go and cover a Graeme Swann press conference – when I heard the devastating news about Dave Wagstaffe from Steve Gordos. As a close friend of his, one who has shared several holidays in Scotland with him, Steve was choked. There will be a lot of sadness, even among those who had known for a few weeks that the outlook was not good. When I got back, there was a message on the house phone from Geoff Palmer to check I had heard.

Sunday, August 11: The old boys’ network at Coventry continues to impress. On the afternoon the Sky Blues played their first out-of-town home match at Northampton, a sprinkling of ex-Wolves men were performing on opposing sides in a game between a Former Players Association X1 and a Midland All Stars side. Mel Eves was player-manager of the latter line-up, which also included Jamie Smith, Jon Purdie and Tony Dinning. In the home ranks was Steve Froggatt – and the attendance at the Ricoh was double that of the League One fixture against Bristol City. 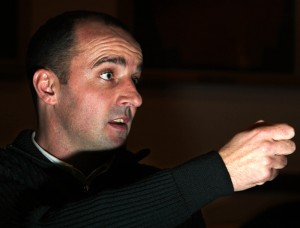 Paul Cook, as pictured in Running With Wolves, a copy of which he signed for us at the Proact Stadium.

Friday, August 16: Had a phone conversation with an anguished Wolves fanatic this morning just before departing to the Frank Munro memorial service at Molineux. Peter Abbott has not missed a Wolves home game since the visit of Tottenham 37 years ago in March, 1976. The last time he didn’t make it to a competitive game home or away was when the train he was on broke down en route for Blackburn in the early 1980s. He once said to me: “I will go to EVERY Wolves fixture between now and when I die.” Alas, his step daughter is getting married on the day of Coventry’s visit to Molineux on October 19 and he knows family must come first on this occasion. What makes Peter’s devotion to the gold and black cause all the more remarkable is that he is from Essex, although he has lived in recent years in Ipswich.

Saturday, August 17: Had the first of what will probably be two or three meetings this season with former Wolves scout David Merrington, also a one-time Southampton manager and Burnley and Bristol City midfielder, when I reported today on Albion v Southampton. I seem to see a lot of the Saints on their visits to the Midlands and Dave’s face – nicely bronzed after no fewer than three months at his place in Spain – is a familiar sight because of his work on local radio down south.