A Molineux Sojourn Amid A Midlands Tour 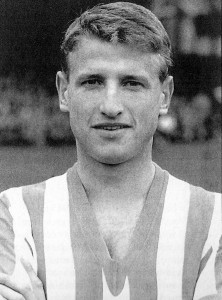 Gerry in his playing days.

It hardly amounted to the most promising opening line in an interview. “I enjoy being a recluse, you know,” said Gerry Summers, when handed the phone after being told I, a complete stranger to him, was on the other end.

Given, though, that he grew up a keen Birmingham supporter, played and coached for Albion, served Walsall as a wing-half and then joined the backroom team at a top-flight Wolves, the desire to track him down was strong.

It was also justified by the eventual retelling of his half a century in the game; a span that took him close enough to Bobby Robson as to have him as a house guest and sufficiently familiar with Ronnie Allen – the man who brought him to Molineux – to lead to meetings with Frankie Vaughan, Peter Alliss, Seve Ballesteros and others.

The friendships were formed at The Hawthorns, where Summers signed as an amateur in 1950 and then as a professional in August of the following year. Born in Small Heath, he had idolised the likes of Gil Merrick and Ted Duckworth in following his local side in his formative years and had another of the yesteryear West Midlands greats barring his way to a first-team place at the club who contested an epic 1953-54 League Championship title race with Wolves.

Ray Barlow was usually the man in possession of Albion’s no 6 shirt during a decade in which the younger pretender was restricted to only 25 senior games, most of them in his debut season of 1955-56.

Insufficient first-team opportunities in the West Midlands were followed by a glut of them in South Yorkshire, initially under Joe Mercer. The stylish Summers played 260 matches in the League alone for Sheffield United, helping them to the FA Cup semi-finals of 1960-61 and to Second Division promotion behind Ipswich the same year.

At £3,000, he was the only one of the legendary Blades ‘back six’ of Alan Hodgkinson, Cec Coldwell, Graham Shaw, Brian Richardson, Joe Shaw and Summers to have commanded a transfer fee. “We played for years together and never seemed to miss a game,” he said.

“I was left midfield, although sometimes right side when I had played at Albion. A few of the United players said they knew I was going to be a manager because I suggested after one match that we should drink a bottle of champagne that we had been taking round the country with us, looking for an excuse to get stuck into it. The manager, John Harris, agreed and we opened it in the dressing room after one victory.”

A £14,000 cheque took him to Hull in 1964, from where he returned to this area with Walsall in October, 1965, and found himself a club colleague of a clutch of former Wolves players in John and Gerry Harris, Harry Middleton and Clive Ford. But, by now well into his 30s, he was aware of his looming new vocation.

“When I was still playing at Hull, I was offered my first off-field job because the FA wanted a full-time coach for the Midlands,” he added. “I didn’t take it then because I wanted to carry on playing. But I would spend two or three weeks doing preliminary and full-badge courses as a staff coach at the FA.

“I spent a lot of time at Lilleshall, which was the school of coaching. The director there used to find me assignments all over the place to keep me going when I needed them. It kept the wolf from the door.

“Graham Taylor would have been on the courses – and Don Howe and Bobby Robson. Bobby sat next to me once and I thought it was to ask about a player. Instead, he wanted to know the best way to Snow Hill. My dad had his car with him, so we gave him a lift.

“Walsall wanted me to stay on as part of their backroom team but I knew the people in the jobs there and I didn’t think it would go down too well if I got in among them with my ideas.”

Summers, having played 51 games for the Saddlers, didn’t have to look far afield for his first opening in a club dug-out.

Allen had been to Crystal Palace and back since calling time on his phenomenal Albion career and was now making a big impression slightly across the patch, going in at Molineux as a coach and being promoted into the top job in good time to lead the club to promotion in 1966-67 and to success in the United States at the end of the season. 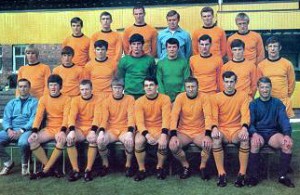 On the far right of the front row on a Wolves team photo, with Ronnie Allen far left.

“Going to Wolves was down to Ronnie Allen, who I was also golf partners with. He was off scratch. He was always opening doors! We met Peter Alliss at a golf club over in West Brom and he introduced me to Seve at The Belfry at one of the Ryder Cups in the 1980s. We also went to see Frankie Vaughan in West Bromwich or Wolverhampton when he was relatively unknown. We met him backstage.

“I went in at Wolves just after they had got back in the First Division. I think Ronnie knew it was going to be a battle. I didn’t have much experience because I had been a coach of coaches until then really and became a big mate of Dave Sexton, who recommended me for a few jobs in his time.

“At Wolves, we beat Arsenal home and away and had some good players, like Derek Dougan and Mike Bailey, who were the big guns. I worked hard to get Mike properly fit. He had had some injuries, put some weight on and lost a bit of confidence. But he was willing and we got him much fitter.

“Waggy was a law unto himself but was an outstanding player and could run full-backs ragged on his day. Alun Evans…..I remember Ron telling him to close down an opponent and being told back: ‘I don’t think people have come here to see me close players down.’ But he had great skill and could finish.

“Ronnie was effervescent and good at spotting talent. He did tremendously well because they had had lean years but the chairman wanted Bill McGarry from Ipswich. He brought Sammy Chung as his assistant, so I was on the exit route as well, although I lasted a few weeks after Bill came in.”

Good things seemed to happen to Summers in summers. In July, 1969, he embarked on a six-year spell as manager of Oxford, who he steered to an unlikely League Cup victory over Wolves not long after.

He was then in charge of Gillingham for a similar length of time before linking up again with Allen, this time at Albion in the latter’s second stint as manager there. Gerry was a small part of the Black Country fabric, having played as an opening batsman for West Bromwich Dartmouth in the Birmingham League.

“I remember Ronnie’s first training session after becoming Albion’s manager for the second time,” he added. “They had just sold Bryan Robson and Remi Moses to Manchester United and had nobody who could win the ball. Gary Owen was the main man in midfield.

“Ron had just come back from a trip to Holland and said he had seen a strong player who could also play at centre-half. I said: ‘Get him, then!’ It was Martin Jol. The whole scene changed in his first work-out with us because he was such a competitive guy who just wanted to play. The older stagers decided they had better follow his lead. Martin called me ‘coach.’

“I had chances to go abroad that Ronnie set up for me. One was in Holland but they weren’t with big clubs and I was never 100 per cent keen as we had a young family.

“Our son Paul is a big fan of the Leicester Tigers rugby team but is a Wolves supporter in football as he used to go there with me. I took him in the dressing room once and he knocked the mud off Derek Dougan’s boots. He sat next to one of The Doog’s sons in the stand.”

It was by no means a one-off meeting with the game’s leading figures. As Summers embarked on a briefer tour of the East Midlands clubs, having covered most of the West Midlands ones, Bobby Robson remained a presence in his life.

“He came to our house several times, including once after a match at Leicester at which we had sat together. He was worried about finding the way home but he loved my wife Pat’s scones, so he came back for tea before he set off. Once, at her mum’s in Kingswinford, she had cooked an evening meal for the whole of the FA staff, including Bobby and Don Howe, because the food wasn’t too good at Lilleshall at the time.

“When Bobby was England manager and I was out of work, he asked me to go and watch lads from the under-21s bracket. I also went to several games at Wembley as his guest and there would be a parking space and four-course meal laid on.” 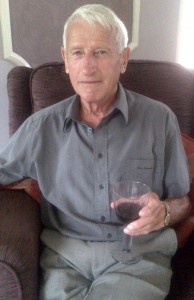 Summers had more than four years with Leicester and subsequently became youth development officer at Derby, only to realise his knees had ‘gone’ and to be switched by Jim Smith into scouting work in the Midlands.

He has since had the two troublesome joints replaced but can’t twist well enough these days to play golf. He still plays tennis, though, as well as being seen on walks and on his bike in the Leicestershire village in which they live.

He turns 80 in early October and it’s possible to detect he might occasionally enjoying playing up to the ‘grumpy old man’ stereotype. But, as reluctant interviewees go, he has been good, interesting company on the phone for nearly an hour.