A Bill That May Have Come Early

McGarry Feared Wolves Chance Had Passed Him By 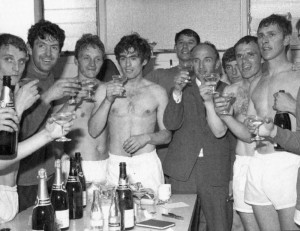 Bill McGarry savours Ipswich's Division Two title triumph a few months before his 1968 Molineux arrival. To his immediate left is Sammy Chung and to his immediate right is Danny Hegan. On the far right is Ray Crawford.

It’s 45 years this autumn since Bill McGarry was installed as Wolves manager – but the dusty archives reveal how he might have arrived at Molineux much sooner.

Wolves were only a few weeks into the first of their two mid-1960s Second Division seasons when the Staffordshire-born former England wing-half was strongly touted for a return to the Midlands.

At the time, McGarry was making considerable waves at Ipswich, where he had succeeded Jackie Milburn in the autumn of 1964 in charge of a side who had failed to win any of their first eight games but who he lifted to a final Division Two placing of fifth.

Although the Suffolk club disappointed in 1965-66, that didn’t stop Wolves making a move as they sought a more permanent appointment in place of the ‘fire fighter’ that was Andy Beattie.

The back page of the Express & Star on October 4 of that season carried the heading ‘McGarry: It’s Up To Ipswich’ and the sub-heading ’50-50 Chance of Ex-England Man Coming to Molineux’.

But pressmen in East Anglia, where Wolves beat Norwich 3-0 the previous weekend, were suggesting Ipswich would not let their manager join Wolves. Their club called a board meeting two days later to discuss the matter but perhaps their reluctance to part company with the highly-rated 38-year-old was summed up by the fact that chairman John Cobbold, the man who had been approached by John Ireland, declined to interrupt a family holiday in Scotland in order to attend.

Sure enough, Ipswich directors decided at a noon meeting on the 6th that they would not free their man from his three-year contract.

McGarry said: “Obviously, I’m disappointed. I asked the board for my release and they wouldn’t give it me. Wolverhampton is one of the top six managerial posts in the country and chances like this come only once in a lifetime.”

As we now know, the manager was wrong in that belief. Ireland did get his man three seasons later – and we should be grateful for the delay! Presumably there would have been no Bailey, Parkin, Hibbitt, Dougan or Munro at Molineux had Ronnie Allen not been installed there instead in the meantime. 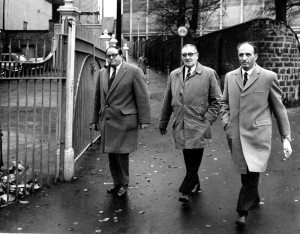 This photo from David Instone's Wolves In Pictures book shows McGarry on day one at Molineux with chairman John Ireland (left) and secretary and general manager Jack Howley.

Ipswich said in a statement they appreciated the ‘proper’ way McGarry and Wolves had acted in the matter, which may explain why business was ultimately done in November, 1968. That’s when McGarry left East Anglia for the West Midlands, with Ipswich back in the top flight after being crowned Second Division champions. He was replaced by Bobby Robson.

It is worth pointing out the many Wolves connections, past or future, with the the mid-1960s Portman Road dressing room.

McGarry had Sammy Chung working at his side and included Danny Hegan and Derek Jefferson in his squad as well as re-signing Ray Crawford there after his stints with Albion and Wolves.