A Success Story With A Dramatic Opening 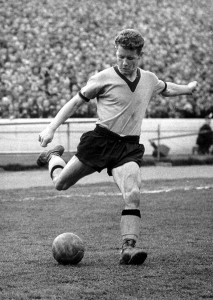 Barry Stobart at Chelsea on the afternoon he booked himself a shock FA Cup final place.

Major Buckley’s decision to play 16-year-old wingers Alan Steen and Jimmy Mullen together against Manchester United in 1939 inevitably raised some eyebrows. There was also that extraordinary mid-journey departure from the team bus when Larry Kelly was told Terry Springthorpe was being preferred to him in the FA Cup final against Leicester ten years later.

But, when it comes to sensationial Wolverhampton Wanderers team selections from across the decades, Barry Stobart’s inclusion in the Wembley showpiece against Blackburn is certainly right up there.

At the age of 21, the former Wath Wanderer was no wet-behind-the-ears kid but there was still a rawness about him as he walked out into the shadows of the twin towers, given that he had played only four League matches.

The man he kept out at Wembley, Bobby Mason, was not only two years his senior but had also won League Championship medals in each of the previous two seasons – glorious campaigns to which he had contributed a total of 26 goals in First Division matches alone.

More than that, Mason had played every game in that 1959-60 FA Cup run, up to and including the semi-final. He had scored twice in the process and had not missed a match in the competition since sitting out the historic home defeat against Bournemouth in January, 1957.

He had even scored 13 times in 37 League games as Wolves went desperately close to winning the title for a third successive year and becoming the first side in the 20th century to win the double.

But Stan Cullis saw something in the pre-final 5-1 victory at Chelsea – achieved with the Doncaster-born Stobart at inside-right rather than Mason – to prompt him to say: “Right, that’s my Wembley team.”

Stobart couldn’t believe his luck. He still couldn’t in the hours following the 3-0 success over Blackburn, in which he performed well and had a hand in two of the goals. One photo shows him staring and smiling at his medal on the Wembley pitch. In another, he is looking lovingly at it in the dressing room. Sitting in an open-all-hours coffee bar after leaving the victors’ banquet, he pulled out the same treasured piece of metal once or twice more in the company of his long-time wife-to-be Maureen. That’s how big the FA Cup final used to be – and it didn’t have much to do with the £50 bonus he received as a winner.

Amid his personal joy, though, he sympathised with Mason. In the 2005 publication Wolves: The Glory Years, I quoted him as saying: “I really felt for Bobby. It must have been a killer for him.

“I thought I had a chance of playing because I’d done reasonably well at Chelsea. But if anyone had told me a fortnight beforehand that I would be playing at Wembley, I’d never have believed them. It was a different world to the one I was used to.”

Stobart became best known as an inside-forward but his first four appearances in the senior side all came at centre-forward. A foot injury to Jimmy Murray early in March, 1960 let him in and he launched his first-team career in a 2-0 victory at Manchester United, where he headed the killer second goal from a cross by fellow debutant Gerry Mannion.

He also netted against Preston on his home debut and stayed in for the quarter-final win at Leicester and the League defeat at the same venue a week later. But, the other side of Wembley, the familiar order was soon restored. 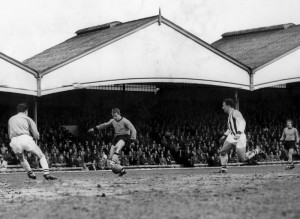 Although he played in the Charity Shield draw at Burnley the following August, the no 8 shirt was handed back to Mason for the start of the League programme – and largely remained on his back.

Stobart had to be patient in waiting for his chances, playing only 11 times that season in a side who finished third in the table. The scoring knack nevertheless stayed with him. His five goals all came in the final five games of the season, including two against Arsenal when Wolves recorded another 5-1 spring-time win in London and, at the same time, went past 100 goals in the 42-game League season for the fourth year running.

Barry’s total of Wolves games reached only 54 but the 22 goals he netted along the way showed what a good player he was in his own right. His most prolific season was 1962-63, when he scored 14 times, including braces against Manchester United, Leyton Orient, Albion and Nottingham Forest, in 24 appearances. Those particular heroics often came when he was deputising at centre-forward for Ted Farmer.

His fortunes declined again from then on but he had a club record to his name when the former Molineux coach George Poyser took him to a then Second Division Manchester City for £20,000 in August, 1964, a few weeks after he returned from Wolves’ summer tour of the Caribbean. He had scored a huge 110 goals in 197 Central League games!

Maine Road, where he played alongside Murray and Dave Wagstaffe, proved a brief stopping-off point for Stobart, who was then ready, following a £22,000 move back to these parts, to welcome Peter Broadbent to Villa Park after he, too, had moved on. Both, by coincidence, also served Shrewsbury.

Barry totalled almost another 100 games for those two Midlands clubs before feeding another passion. He and Maureen enjoyed the sun, so his three years with Durban Spurs in South Africa, where he also worked for a company who made shirts, suited them nicely. It also allowed them to cement their good relations with the likes of team-mate Johnny Kirkham and Des Horne, although a friendship with the late Wolves winger Cliff Durandt turned sour after their younger son Loy had gone out to the Johannesburg area to play in the 1990s for a side managed by Terry Paine.

Barry, who was only six when his father walked out of his life, was a keen, proud watcher of his sons’ efforts to forge League careers of their own.

Sean, now 47, was a left-back who had a spell with Allan Clarke at Scunthorpe as the highlight of a career that also took him to Worcester, Dudley and Willenhall.

Midfielder Loy, who is five years younger, was picked up by Nottingham Forest in the Brian Clough era and travelled with their first team without playing a game. I well recall returning from a Wolves pre-season trip to Northern Ireland in 1990 to eager questioning from Maureen, who was a long-time work colleague at the Express & Star. He was on the fringes of Graham Turner’s squad by then and went on as a substitute in the win over Robbie Dennison’s former club Glenavon. A broken leg set him back considerably, though, and it was in the non-League game that he was next seen. 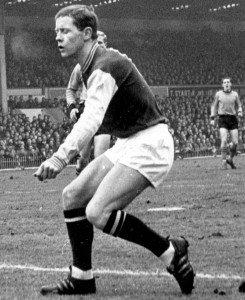 ...and in action against Wolves for Villa.

Shaun is now a landscape gardener and has taken over Barry’s successful window cleaning business while Loy is teaching and coaching in Antigua, their father also having been a successful manager of Willenhall and Dudley and taken the former to Wembley for the 1981 FA Vase final which they lost to Wickham.

For a while, the Stobarts had grocery and fish and chip shops in the Lanesfield area of Wolverhampton, right next door to a clothes shop run by their close friend Graham Newton, a former Wolves youngster. They have lived for many years in Sedgley and would have celebrated their 50th wedding anniversary in early October.

And so we are left with only six surviving members of the last Wolves side to have lifted the FA Cup – Malcolm Finlayson, Gerry Harris, Ron Flowers, Bill Slater, Peter Broadbent and Horne. The Molineux flags are once more at half mast.