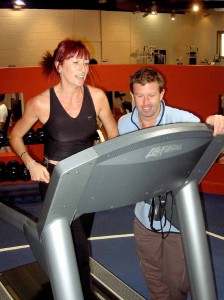 'Do as I say, not as I do' - Steve Froggatt in personal-trainer mode.

Steve Froggatt has declared what was left of his playing career to be well and truly over after misfortune in a charity match left him struggling in his ‘day job’.

The mid-1990s Wolves winger or wing-back was persuaded to pull on his boots once more for a game at the currently under-used Ricoh Arena, only to sustain a serious injury that has left him on crutches.

“Because of my past fitness problems, I’d only played about four football matches in 14 years but agreed to turn out in this one as it was staged at another of my former clubs, Coventry,” he said today.

“As I set off on a run, though, I thought someone had whacked me on the back of the right leg because I clearly felt something. I turned round and there was no-one within ten yards.

“I knew pretty quickly that I’d snapped my Achilles tendon. It’s a full rupture. At least the pain hasn’t been too bad at all. I think that’s because my nerve endings are shot!”

Froggatt turned 40 earlier in 2013 and is feeling every one of those years now as he struggles in and out of football grounds on a schedule that’s due to take in Old Trafford and Wembley in the coming weeks.

Gamely, he is refusing to let his handicap defeat him and is also still appearing twice a week on a phone-in show on BBC WM as well as covering games for BBC Radio London.

“It’s trains, planes and automobiles because I have no idea when I’ll be able to drive again,” he added. “I’m getting well used to being dropped off at the railway station at this end and turning up at a ground by taxi.

“But the fun and games tend to start when I arrive. Burton Albion, where I went for the recent Capital One Cup tie against Fulham, have a lift conveniently located and Nottingham Forest, where I saw Millwall, have only short flights of stairs.

“I was practically on all fours when I went to the Stoke v Crystal Palace Premier League game, though, because I’m on crutches and can’t bear any weight on the one side. I don’t know how I will cope at Manchester United v Palace this Saturday.

“I was in plaster for three weeks and now I’m in a special boot for about seven. I was given the choice of having an operation but went for the self-healing route, with a few potions from Tony Daley at Wolves as back-up.

“I go for a check every couple of weeks and one of the Burton Albion doctors is looking after me at one of the local hospitals.

“The silver lining to the cloud was the news that the match I’d played in had raised about £22,000. And my problems have helped get me a bit closer to the fans. 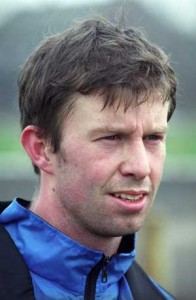 Froggy during a break in training at Wolves approaching two decades ago.

“I keep finding myself chatting away to supporters that I meet on trains. I recember meeting some from Wolves when I was going down to London last season and I’m so pleased they have something to smile about again after a desperate couple of years.

“I have followed Kenny Jackett’s career with interest from the Millwall games I have covered and I am optimistic now for Wolves’ chances, although there are plenty of teams playing good football in that division.”

One of the plum assignments on Froggatt’s forthcoming schedule is the potentially crucial England v Montenegro World Cup qualifier at Wembley.