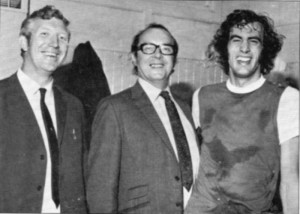 John Holsgrove has let us in on his dalliances with the showbiz world after a photo of him with one of the 20th century’s great entertainers came to our notice.

Wolves supporters of a certain age will know that the lanky defender was a Shadows fan who enjoyed an occasional strum on the guitar.

But our enquiries have revealed that his life was touched more than once by the stars of stage and screen during his time in football.

This picture, showing Holsgrove with Eric Morecambe and Sheffield Wednesday icon Derek Dooley, was taken in the home dressing room at Hillsborough after he had helped the Owls to a 3-0 Second Division victory against Sunderland early in 1971-72.

The entertainer, sufficiently in love with football as to be a long-time Luton director, was appearing at Sheffield’s Fiesta Club at the time with Ernie Wise and is seen joking about having to stand on tip toes to be able to get in the same shot.

Dooley was then manager at Wednesday – a club for whom Holsgrove made well over 100 appearances before finishing his career with brief spells at Stockport and Stalybridge Celtic.

“We saw a lot of stars at the Fiesta because they would let us in for nothing there,” said the one-time Owls captain. “I’m obviously smiling because we’d had a good win as well as the fact we had Eric among us.

“If I remember right, he paid us a visit once when we beat Luton at Hillsborough as well. Harry Haslam, who was their manager for several years, was a friend of Derek Dooley’s.

“We saw quite a few top performers at the Fiesta, like Cliff Richard and The Shadows, The Baron Knights and Lulu. It was an amazing place. I knew the drummer from Lulu’s backing group quite well.

“When we were being put up in a hotel in Sheffield after my transfer there and our son Paul was about six months old, Jack Jones was on the next table once.

“Bruce Welch from The Shadows was going round at the time with a young and gorgeous Olivia Newton-John and I’ve said over the years how I tempted her to my bedroom. The truth was actually that we all clicked and she put Paul to bed one night!

“I had guitar lessons when I was playing for Wolves and I think people around the club know I was a fan of The Shadows, so meeting these performers was a special thing for me.” 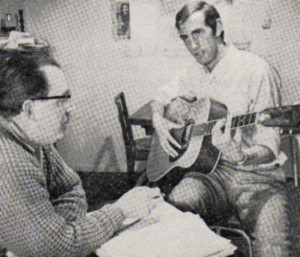 John in the 1960s with his Wolverhampton-based guitar teacher Horace Johnson.

Holsgrove turns 68 next week and was shocked to learn on an extended recent stay in Spain of the passing of Dave Wagstaffe.

The defender kicked off his Wolves career with a quartet of successive 3-0 victories in the 1965-66 Second Division season and Waggy scored in the first three of those games.

“I also recently received an email telling me Barry Stobart had died as well,” Holsgrove added. “It has been a very sad few weeks.”