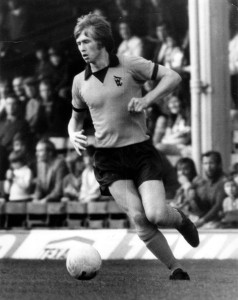 Peter Eastoe….in the happier part of his West Midlands stay.

Thursday, August 22: A day to feel both sad and proud; Dave Wagstaffe’s funeral. What a turn-out! Sat in church behind Kenny Hibbitt and John Richards and their wives. John did one of the readings. My own ‘speaking’ part was much more low-key – an interview by phone with Paul Franks at BBC WM during the refreshments back at Molineux afterwards.

Friday, August 23: Tiptoed behind Matt Murray in the press box while he was summing up on air after Wolves’ last-gasp victory over Crawley. It was such a pleasure to hear him using the phrase ‘top of the table’ in relation to the club after the pain of the last couple of years.

Tuesday, August 27: Read about Alan Ainscow and how the Former Players Association at Blackpool, where he started his career, had staged a benefit game for he and Ian Britton, both of whom are fighting prostate cancer. I interviewed Alan for the Wolves v Blackpool programme last season and learned of his personal battle when I spoke to him again recently during the Ashes. Sixty former Blackpool players were said to have been among a 1,000-plus attendance at the match against a Vintage Claret XI (Burnley).

Friday, August 30: Spoke to Mick Kearns, who was recently honoured at Walsall with an evening to mark his retirement. He was the Saddlers’ goalkeeper coach and community director and, apart from his three years at Wolves, had spent almost 40 years with them since signing at Fellows Park as a player from Oxford in 1973. The 62-year-old former Republic of Ireland international made more than 300 appearances in Walsall’s goal. 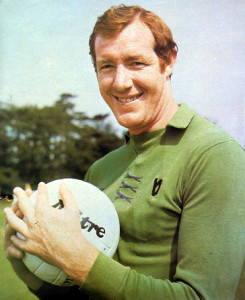 Mick Kearns more than 30 years ago.

Tuesday, September 3: Met four former Wolves players in the Molineux press box at the Johnstone’s Paint Trophy match against Walsall – the aforementioned Mick Kearns and Matt Murray, Paul Jones (not the goalkeeper!) and, more unusually, Jody Craddock, who was doing some work with WM.

Friday, September 6: Spoke to Billy Rafferty on behalf of Backpass to ask him what job he now did. Answer: He organises five-a-side corporate football leagues in the Carlisle and Cockermouth areas, where he lives. The information was for a Where Are They Now piece on the mid-1980s Portsmouth side. Billy is looking forward to Wolves’ visit to Brunton Park – scheduled for next month but likely to put back because of international calls – and possibly to following the Cumbrians to Molineux later in the season.

Wednesday, September 11: Read an interview with the two-time former Wolves striker Peter Eastoe saying his transfer to Albion in the early 1980s was the worst move he made in his career. In the chat with the www.bluekipper.com website, he said he regretted his switch to The Hawthorns as it took him away from Everton, who were just about to take off and evolve as the side who would win the League Championship under Howard Kendall.

Saturday, September 14: Caught up again with Freddie Goodwin, the early 1960s Wolves wing-half who has returned to Molineux in the last few years after a long absence. He is now back living in England following his exile in New Zealand and France and had a hip replacement two weeks ago. Also had a chat with Frank Wignall in Nottinghamshire to get clearance to pass his number on to a fellow interviewer.

Wednesday, September 18: Have been revisiting an unusual plea for help sent to us by Ross Grey, a 34-year-old Wolves fan who has been following the club since he was six. Ross asked whether any fellow supporters had the late 1980s Staw Distribution shirt as he is looking to buy one after his cousin lost his some years ago. He is also keen to purchase the early 1990s ‘tyretrack’ version. Anyone in a position to assist should contact him by email at Orientalrug@hotmail.com or get in touch with us.

Tuesday, September 24: A surprise face in the Aston Villa press box for tonight’s Capital One Cup tie against Tottenham – Dean Saunders. The former Wolves manager was looking relaxed and said after performing 5 Live Sports Extra summarising duty that he was ‘enjoying the break’ – evidenced by the fact he is playing golf nearly every day and has got his handicap down to eight. Also here, with crutches, were Steve Froggatt, and one-time Molineux loanee Andy Blair while Stan Collymore was spotted, with kids, in the stand.