Artist Who Was A True Legend Among Greats 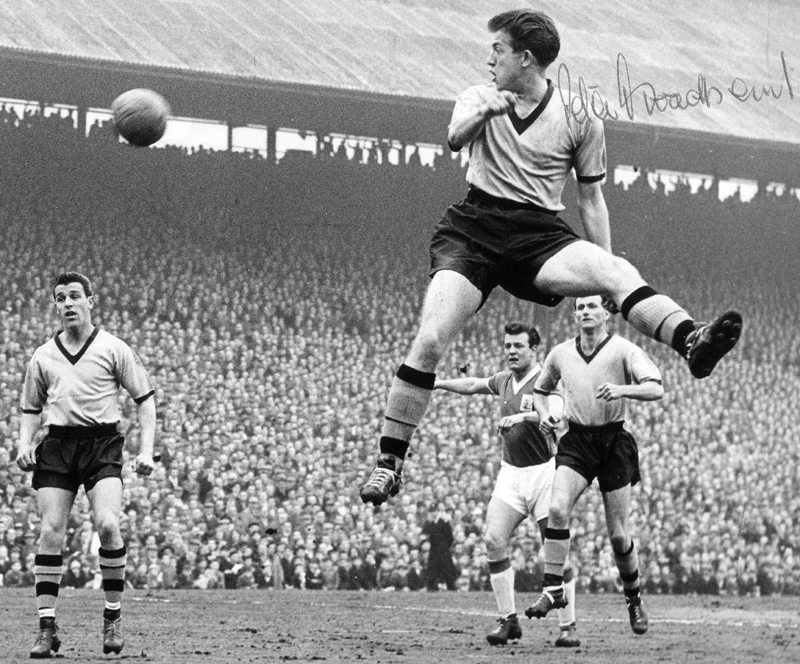 A signed photo of Peter Broadbent sending a header at Birmingham’s goal at a packed St Andrew’s in 1957. Watching him are Harry Hooper (left) and Jimmy Murray.

It would have been impressive enough for Peter Broadbent to play 497 League and cup matches for a Wolverhampton Wanderers side pottering along in mid-table.

Class act that he was, though, he just happened to do his work while they were cutting edge; not only winning and chasing trophies but also stocked with any number of other top players who were after his shirt. Put simply, he was imperious among a team of true greats.

At first it was with the likes of 1949 FA Cup winners Jimmy Dunn, Sammy Smyth and Jesse Pye that he was jousting for a place. He described Pye as one of the best players he had seen at the time and, by way of further competition, jovial Scotsman Johnny Walker (26 goals in 44 appearances for the club) was also hovering.

Later it was Dennis Wilshaw, Colin Booth, Bobby Mason and Jimmy Murray rivalling him for a shirt. It was and is impossible to make a mark above and beyond men of that ilk without being a top, top performer. My guess is that Broadbent is a worthy contender for the tag of being the best inside-forward Wolves have ever had.

I had the privilege of seeing him play for the club but only once – and that against Aston Villa in his final game for them. I was too young to now claim any first-hand knowledge of his brilliance. For that, I rely on the word of others, plus a glimpse of him in Aston Villa colours a couple of years later – and the statistics that don’t lie.

A succession of sound minds refer to him as being a hero to their generation; the George Best, Sir Alex Ferguson and Peter Knowles generation if you like, because each named him as an idol.

In a Wolves team who relied on no little amount of physical strength, as personified by Bill Shorthouse, Eddie Stuart, Bill Slater and others, and a direct supply line to probably the best wingers in the land (take your pick from Hancocks, Mullen, Deeley, Hooper and Leslie Smith), Broadbent was a star turn.

He has been likened by one experienced Wolves watcher to a yesteryear Steve Gerrard. Another said he had some of Gazza’s dribbling ability. Well, with any combination of the talents of those two, you have some player.

Only six men have played more Wanderers games than Broadbent and only five have bettered the 145 goals he scored for them. Admittedly, he played in an attack-minded era and in a side to whom the concept of shutting up shop was totally alien. But his good friend Steve Gordos, who wrote a 2007 biography of his all-time favourite, reminds us that Broadbent was, essentially, a provider for others. Lord knows how many assists he must have been responsible for then!

For a 1990 publication of my own, Wolverhampton Wanderers Greats, I interviewed Peter at his home in Codsall and also visited and photographed him at the babywear shop he and his wife Shirley then ran in Halesowen.

He revealed some of the lengths to which interested clubs had gone in securing his teenage talents, with Brentford first to offer him a stage as they signed him from Dover on his 17th birthday. “Two days before, I was playing at Margate in the final of something like the Kent Senior Cup,” he said. “Brentford were so frightened I was going to change my mind and sign somewhere else that they had a taxi waiting outside the ground for me at the final whistle. They whisked me off and I stayed at the home of one of the scouting staff for two nights before I signed.”

Within weeks, Broadbent was playing the first of his 16 games in a Brentford side also containing Ron Greenwood and it wasn’t long before Wolves and Newcastle set their sights on him. 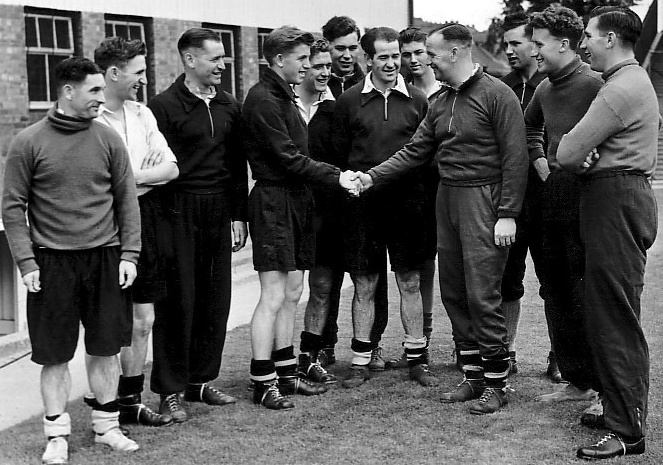 The anxious 17-year-old meets Jack Dowen while going through the introductions at Molineux in 1951.

Stan Cullis watched him in one match and his scout George Noakes saw him against Leeds, John Charles and all, in another. It didn’t take long for the penny to drop.

“I only saw a few minutes of anything out of the ordinary from him but that was enough,” Cullis told me at his home in Malvern during research for the same Wolves Greats project. “He was a natural. There was a certain flair about his play and he did things spontaneously. His control and ability to go past players were his real hallmarks and he had a natural body swerve which only comes to the really gifted players.”

George Poyser had been Broadbent’s manager at Dover and also his coach at Griffin Park. He was soon his coach and landlord in Wolverhampton, too. A few weeks after the youngster, smartly attired in collar, tie and raincoat, had stepped off a train here in the company of his parents, his guiding light made the same move north with his family and found a grateful lodger at their home in Waterloo Road, a few yards from Molineux’s main reception.

Given how Wolves came to win the small matter of three League titles in the 1950s, the temptation to think they won every week in those days is strong. Not so. Remarkably, and presumably to his considerable personal embarrassment, the club lost all of the first eight games Broadbent played for them, starting with a 3-2 Molineux defeat against Portsmouth on March 17, 1951. When the unfortunate sequence was broken on the last day of that season, it was with a goalless draw at Sunderland.

Born among the Kent coalfields the week after Major Buckley’s Wolves had ensured First Division safety by beating Everton on the last day of the 1932-33 campaign, Broadbent turned 18 on the club’s long tour of South Africa in the summer of 1951, when a surprise party was thrown for him.

He had already got off the mark with a goal in a narrow loss at Albion and netted four times in the republic, including a hat-trick against Sout West Districts in Mossel Bay. He was more than nine months into his first-team career, though, when he was at last able to savour the feeling of making a contribution to taking maximum points – in a 3-0 home victory over Blackpool.

That highlight followed the four and a half months he spent in the shadows while Dunn, Smith, Walker and Pye held sway amid the interruption the young pretender suffered through doing his national service and essentially being seen at the club only on match days.

The cream nearly always rises to the top, though, and Broadbent, whose £10,000 fee when signing from Brentford was then an English record for a teenager, played 36 of the 42 games in 1953-54 when Wolves became League champions for the first time. Curiously, the scoring honours were shared among only seven players; he and five other forwards and Bill Slater.

Never again during the club’s glory years was Broadbent anything other than a regular – and the goals flowed. Twelve in that year when Albion were pipped to the crown and double-figure hauls six other times, with the 20 barrier broken in each of Wolves’ two title triumphs in the late 1950s. He was the side’s top marksman in 1958-59 with 22.

Further international recognition on top of his under-23 selection came when he was picked for England B and he also made a goal-scoring appearance in the Football League representative side. It was only a matter of time before he won a full cap and that duly came in the high-pressure atmosphere of a World Cup group qualifier in the 1958 finals in Sweden. Sadly, his presence alongside Slater and Billy Wright failed to prevent a 1-0 defeat against Russia and elimination from a tournament in which Eddie Clamp had also played. 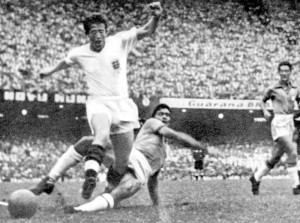 It is well documented that Broadbent had the misfortune to be around at the same time as Johnny Haynes and everyone north of Watford remains convinced that it’s never a bad thing when it comes to England to be attached, like the Fulham maestro, to a London club.

The Wolves man scored twice in seven games for his country – the same as Johnny Hancocks, Ronnie Allen and Frank Wignall as it happens. Both goals came against Wales in a draw at Villa Park, after which he also faced Scotland home and away, Italy and, in front of around 130,000 in Rio’s Maracana Stadium, world champions Brazil.

At the time when Wolves were adjusting to life in the Second Division under Graham Turner after their previous exile in the lower divisons, the genial schemer reflected on how the players knew how significantly they sat in manager Walter Winterbottom’s thoughts. “The planes had first and second-class compartments and you knew you were out of favour if Walter asked you to sit in the cheaper seats,” he said.

Broadbent married in 1956 and regretted the fact that Shirley was unable to join the fun of what he regarded as the highlight of his 14-year Molineux career – the 1960 FA Cup final victory over Blackburn. She was eight months pregnant with their son Gary and sidelined from a trip which ended in the sort of festivities the Iron Manager usually frowned on.

It is surprising that, in terms of honours and international call-ups, that was the end of the line. He was still only 26 and his longevity saw to it that he reeled off another 150 or so games for the club and fully justified the 1965 testimonial at which Derek Dougan, Don Howe, Jimmy Armfield, Bert Trautmann, George Eastham and Peter’s mentor Tom Finney were in an All Star XI. “Wolves are losing a great soccer artist,” mourned chairman John Ireland as the resulting cheque was presented at a sportsman’s evening at the town’s Victoria Hotel.

Broadbent was sold to the then Third Division Shrewsbury for what was a record transfer fee for them of £10,000 and the suspicion that he had gone too low too soon was underlined when he popped up again in the top flight at Villa before winding down his playing days with Stockport and Bromsgrove.

His was a wonderful career, packed with all those memorable floodlit friendly occasions as well, plus the honour of scoring Wolves’ first goal in recognised European competition.

With the boots hung up, golf, as well as a grocery business in Codsall, occupied his thoughts more than football.  He got down to a two handicap and son Gary played as a professional on the European Tour. As if to prove that these talents are in the genes, his grandson on his daughter Debbie’s side, Andrew Smith, emerged as a brilliant amateur player in England and America. 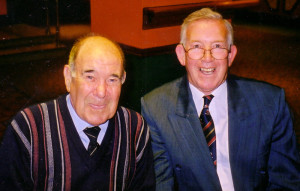 With his best Molineux mate Norman Deeley at a function in 2002.

It was while interviewing the youngster at his home in Wombourne that I saw his grandfather for the last but one time. I subsequently spoke to Peter about an article for the Wolves programme early in the club’s first Premier League season, by which time there were strong signs of the Alzheimer’s problems that were to so seriously blight the final decade of his 80 years.

What a sadness it is that the memories he provided for so many others were eventually completely lost to him.