A ‘What If’ Of Huge Proportions

Duo Who Would Have Greatly Changed Molineux Landscape 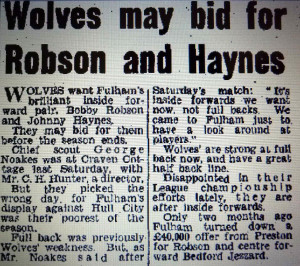 Some interesting food for thought…….

Magnificent a player though everyone agrees Peter Broadbent was, we are perhaps entitled to ask whether there was a time when Stan Cullis wavered in his appreciation.

The inside-forward was about a third of the way through his phenomenal Molineux career when The Iron Manager reportedly had his sights set on strengthening in his position.

Not just with any old players either but, if the Daily Express was to be believed, with what the paper called ‘the brilliant inside-forward pair, Bobby Robson and Johnny Haynes.’

Now, we shouldn’t be too presumptious here but it doesn’t take a genius to work out that, had Cullis signed either or both of Craven Cottage’s finest, it is hard to believe that Broadbent would or could have played as many Wolves games (497) as he did.

So was Peter not considered the full ticket? Or was it to be him and one other for the inside-forward roles? A third alternative, with all those players to call on, would have been to play Robson at wing-half, not that Ron Flowers, Bill Slater and Eddie Clamp were too shoddy in that role.

It’s an interesting talking point and one Wolves were apparently not overly anxious about playing down.

The Express story followed the reported appearance of Cullis’s scout George Noakes and a member of the Molineux board at Fulham’s home game against Hull in the spring of 1955.

Furthermore, it quotes Noakes as stating where exactly his search was focused after earlier reports had suggested Wolves were looking for full-backs. “It’s inside-forwards we want now, not full-backs,” he is reported to have said.

This might all have been less surprising had Wolves not been approaching their pinnacle of 1950s greatness. They were champions at the time and in the process of pushing Fulham’s neighbours Chelsea hard for the 1954-55 title. 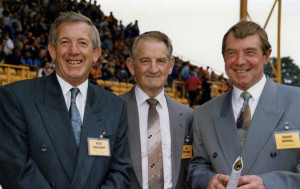 Broadbent, as we will be reminded again at his funeral in three days’ time, duly stayed in the West Midlands to not only add two more League Championship winners’ medals but to embark at the 1958 World Cup finals on an all-too-brief England career.

This isn’t to say, though, that Robson and in particular Haynes were not high-quality performers as well.

Haynes played a remarkable 594 League games for his only English professional club while Robson backed up a spell of 344 League matches by also having a stint as manager there before moving on to Ipswich, England and various other top posts.

We will leave alone, for now, the debate over whether it was just that Haynes won 56 England caps to the seven Broadbent collected.