A Fitting Send-Off For The Schemer Touched By Genius

‘He Was The One Who Made Your Blood Tingle’ 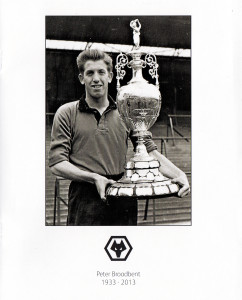 It’s the realisation of who isn’t present at sad events like this afternoon’s that remind us most of all how the years are hurtling by.

As the Wolverhampton Wanderers community turned out in force once more, this time to honour the passing of Peter Broadbent, so we were left to regret how age and in some cases illness had prevented the attendance of several other long-time team-mates who would love to have been there to pay their respects.

Bert Williams, at 93 the oldest surviving England international, is in New Cross Hospital, although hoping to be back in a nursing home soon. Bill Slater, in the second half of his 80s, can no longer take for granted the trips he used to relish making from his home in West London while Roy Swinbourne and Eddie Stuart are also well into their ninth decade and have had health problems. Gerry Harris still meets Wolves mates for a pint every now and again and is a good few years younger but still senior enough to make him a rare attendee of gatherings such as this.

Time waits for no man and we are left to accept that, of the side who rounded off Wolves’ years of greatness by lifting the FA Cup in 1960, we are in future likely to see only Ron Flowers and Malcolm Finlayson around on anything more than an occasional basis.

Both men gave tributes in church to arguably the greatest inside-forward in Wolves’ history, Flowers recalling fun times with the young Broadbent when they shared digs with a Mrs Long. Not only did Peter teach the family budgie to make a few choice remarks but revealed how they were forced by circumstance to once share a bed – an occurrence that prompted him to say many years later to his fellow lodger’s wife Shirley: “I bet I slept with your Peter well before you did.”

Finlayson, then still of Millwall, once played in London in the same RAF side as the boy who turned 18 on Wolves’ trip to South Africa in 1951. Amid the austerity of post-war rationing, they were enjoying a bite to eat in a restaurant the night before the game until Broadbent, who was described as having a ‘dry sense of humour,’ pointed out a sign on a wall announcing that they were eating horsemeat.

Goodwin served as a sort of representative of Broadbent’s last League club, Stockport, and told friends: “I used to look up to him so much at Wolves. Then, just fancy! I found myself as his captain at Edgeley Park.”

Club chaplain David Wright spoke of the Wolves family being hit by three powerful body blows in quick succession, with the deaths earlier this season of Dave Wagstaffe and Barry Stobart.

He told how Peter and Shirley had met at a dance at the Civic when the emerging show-stopper had been based at Bridgnorth for his national service. They married in 1956 and had two children, daughter Debbie and son Gary, the latter so clearly blessed with the same sporting gene that he went on to play on the European professional golf tour.

Indeed, Peter, himself once a scratch handicap golfer, had the thrill of caddying for his son in tournaments at home and abroad, including the first two rounds of the Open Championship at Royal Troon in 1989.

This being a footballer’s funeral – a three-time League title winner and once FA Cup winner no less – the famous Wembley anthem Abide With Me was among the other hymns sung and we filed out into the rain on another appropriate note with the playing of Simply The Best.

Steve Gordos gave the other address in the hour-long service and, as he had done for Waggy, spoke eloquently, humorously and sincerely. Broadbent was his ultimate Wolves hero. 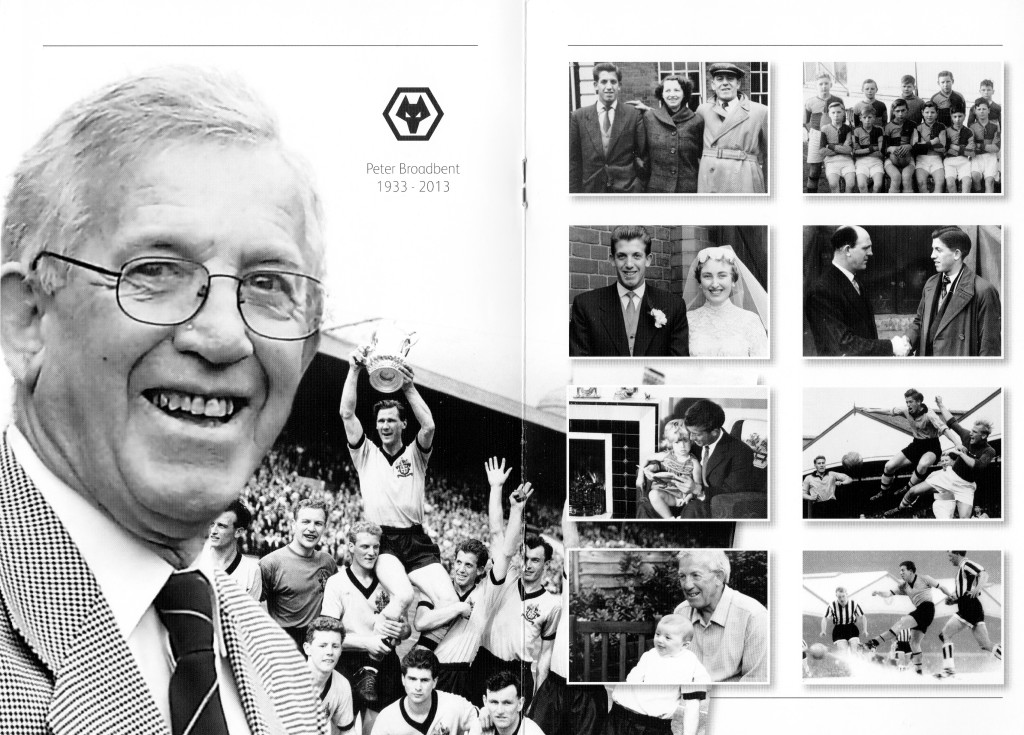 Snap shots of a wonderful career – and the home life afterwards.

“To be a Wolves fan in the 1950s was to be in football heaven,” he said. “And there to meet us at our golden gates, not the Pearly Gates, was our own St Peter.

“Peter was the one who made your blood tingle and brought a smile to your face, whether with a dribble past three or four opponents, with that audacious body swerve or with a shrug of the shoulders.

“He had the ball control of Lionel Messi, could pass like David Beckham and score goals from midfield like Frank Lampard. If someone asked me if he was the most gifted player I have ever seen, I would borrow a Brian Clough phrase and say: ‘Well, he’s definitely in the top one.’ Peter, thank-you for the magic.”