A Loving Thank-You, Half A Century On 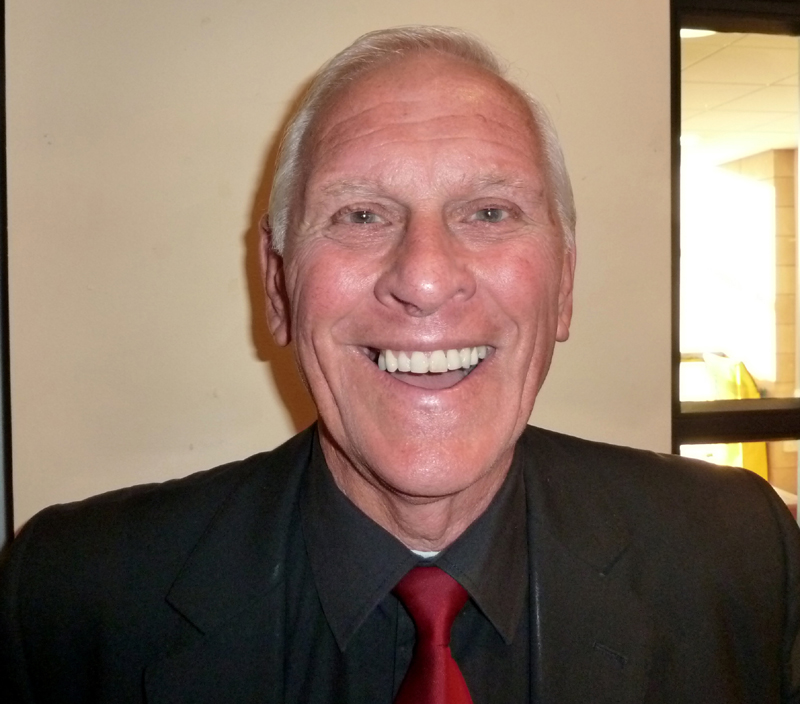 Ray Crawford at a young 77.

Ray Crawford has used a rare trip back to the West Midlands to say another thank-you to the household who put up he and his family in the early stages of his prolific Wolves career.

But it wasn’t just Mr and Mrs Average with whom he, his wife and two children lodged – it was none other than Yvonne and Ron Flowers.

Crawford had a hug for his ‘landlady’ when they met again at Peter Broadbent’s funeral last week and said: “They were so lovely to us.

“My wife wasn’t very happy in hotels. We stayed for a while in one in the town centre, then in the Moreton on the Stafford Road. But she was happy to find somewhere a bit more homely.

“I remember the Flowers’ house backed on to the golf course at Oxley Park and we had some happy times there for a few weeks. It was lovely to have such a nice welcome.

“They had two kids of their own and we had two but they found room for us before we got ourselves properly settled round here.”

Flowers had also been a high-profile team-mate when Crawford made his only two England appearances – in a 1-1 home draw with Northern Ireland in November, 1961, and in a 3-1 Wembley win over Austria five months later in which both players scored.

They also lined up together for most of Stan Cullis’s last full season as Wolves manager, 1963-64, when the centre-forward arrived from Ipswich in mid-September and scored 26 League goals – an astonishing 17 more than the club’s second leading marksman (Terry Wharton) – in only 34 games. And that in a side who struggled to a final placing of 16th.

Crawford was also reflecting last week in Molineux’s Hayward Suite with Wharton over how they had shared the goals in a 2-0 victory over Manchester United, the no 9 pointing to the South Bank End to denote where he put the finishing touch after the winger had crossed.

“I enjoyed my time at Wolves,” he added. “Early in my stay, Stan had given me a right bollocking at half-time in a game at Leicester and I said to the other lads when we went back out that they should be grateful because I had saved them a telling-off by being slaughtered myself.

“I scored the winner that day and Stan was congratulating himself afterwards on his brilliant man-management!

“I also had a strange experience at Filbert Street with Albion. In 1965-66, I scored our goal in a 2-1 defeat and then kept a clean sheet after having to take over in goal from Dick Sheppard, who was injured. But that was obviously not enough – I was dropped by Jimmy Hagan for the next game!” 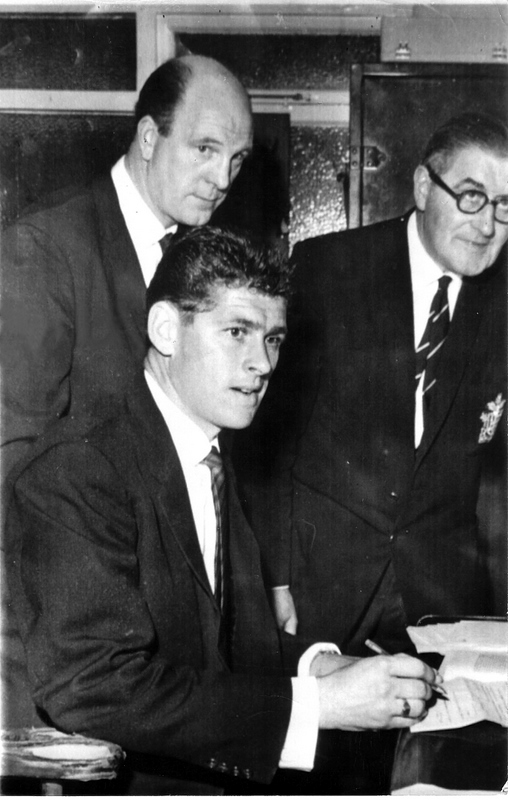 Crawford signs in the presence of Stan Cullis and Jack Howley in 1963. The player had been bathing his baby daughter after an Ipswich home game when the manager shocked him by knocking on his door and telling him he wanted to sign him.

Before crossing the Black Country divide after a fall-out with Cullis’s successor Andy Beattie around the time of two FA Cup meetings with Rotherham, Crawford also netted 15 times in only 26 matches in a relegation-bound side in 1964-65 – a reminder of the colossal scoring power he had carried as a member of Ipswich’s League-winning side of 1961-62 under Alf Ramsey.

No-one can match his total of 203 League goals for the Suffolk club, the tally having been amassed in two spells after he had started his career at his home-city club Portsmouth.

And it’s around Fratton Park that his football world gravitates now. Even at the League basement, he travels to every Pompey game as an enthusiastic summariser on local radio and has his own Monday column in the Portsmouth News.