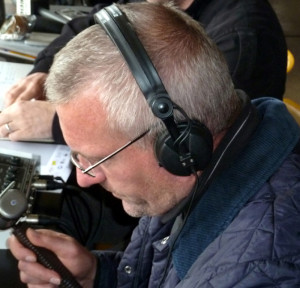 Tim Flowers attired in headphones, rather than goalkeeper gloves.

Tuesday, September 24: Enjoyed seeing Kevin Keen at close quarters as he deputised for Steve Clarke at Albion’s press conference the day before their Capital One Cup tie against Arsenal. Thought he spoke very well, as Keith Downing has on the occasions he has been pressed into the role. Kevin related one of his more painful experiences in the competition during his address – a 6-0 semi-final defeat with West Ham on Oldham’s plastic pitch more than 20 years ago.

Sunday, September 29: Saw Tim Flowers at Stoke as he checked in just in front of me while he was on summarising duty for BBC radio at the Premier League visit of Norwich. Northampton, where he works as part of Aidy Boothroyd’s backroom team, have started the season poorly, so I hope they can ride the storm and not become casualties in what is starting to be seen as sacking season.

Tuesday, October 1: Received not one but two requests to do live radio interviews today following the desperately sad news that Peter Broadbent had passed away. First BBC Hereford and Worcester, who were interested in Peter’s time with Bromsgrove Rovers, and then WM. It didn’t quite end there. My good friend Steve Gordos, perfectly qualified to give expert insight as the player’s biographer, did a piece into the Adrian Goldberg morning show on WM.

Thursday, October 3: Enjoyed seeing the fruits of a piece of work I had a minor part in fixing up in the summer. The Evening Mail asked me to put them in touch with Jim McCalliog and have now posted the interview with him. Please click on http://www.birminghammail.co.uk/sport/football/football-news/wolverhampton-wanderers-now—interview-5432976 for a read, although close friends of Bill McGarry might be best advised to give it a miss.

Tuesday, October 8: Couldn’t help but see the irony of the situation…….Wolves’ penalties in their Johnstone’s Paint Trophy shoot-out defeat against Notts County tonight were absolutely woeful; a complete contrast to the excellence they showed from the spot against Walsall in the last round. And who should be in the press box with us at Molineux but Andy Thompson? He was on radio duty and played when Graham Turner’s side beat the Magpies in the area final of the competition in 1987-88. You’d have staked plenty on him putting a kick away safely, even now at the age of 45.

Wednesday, October 9: I hope we don’t have further proof of it for a long, long time but we were reminded at Peter Broadbent’s funeral today what we saw at Dave Wagstaffe’s funeral earlier this season – that Steve Gordos is an outstanding public speaker. Absolutely word perfect. How he kept it together in talking so poignantly and entertainingly in front of so many about his ultimate football hero, I will never know. And don’t be fooled – he was very nervous beforehand. 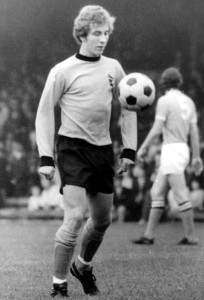 A young Alan Sunderland before his 1971 debut against Manchester City, the club he would also face in the League Cup final three years later.

Tuesday, October 15: Had two meetings with former Molineux personnel today – one by chance, the other planned. Bumped into former club physio Paul Darby in Costa Coffee on Newport High Street as he arrived for a business meeting, then moved on to Wolverhampton to chat with Steve Daley over a possible project.

Friday, October 18: Received a surprise phone call from 1970s Wolves reserve John Rutter, asking when the 60th birthday of his good Molineux pal Alan Sunderland was. Unfortunately, it was in July but my pointing-out that Barry Powell reaches the same landmark this coming January prompted him to recount how he and Barry had briefly engaged in some road rage on the motorway a few years ago before realising who they were aiming their anger at!

Monday, October 21: Interviewed Kenny Jackett and Sam Ricketts during a relief day spent in the Wolves media office and came away even more convinced that the club are in safer hands following the turmoil of the last two years or more. Also re-interviewed super-fan Peter Abbott by phone from the Sir Jack Hayward Training Ground in a case of the wheel turning full circle. This diary feature had the first news as far back as mid-August of his anguish at having to miss a Wolves home game for the first time since 1976. In the meantime, he had featured on a whole host of radio stations and even some TV bulletins.