Wolves Heroes Who Reached For The Sky 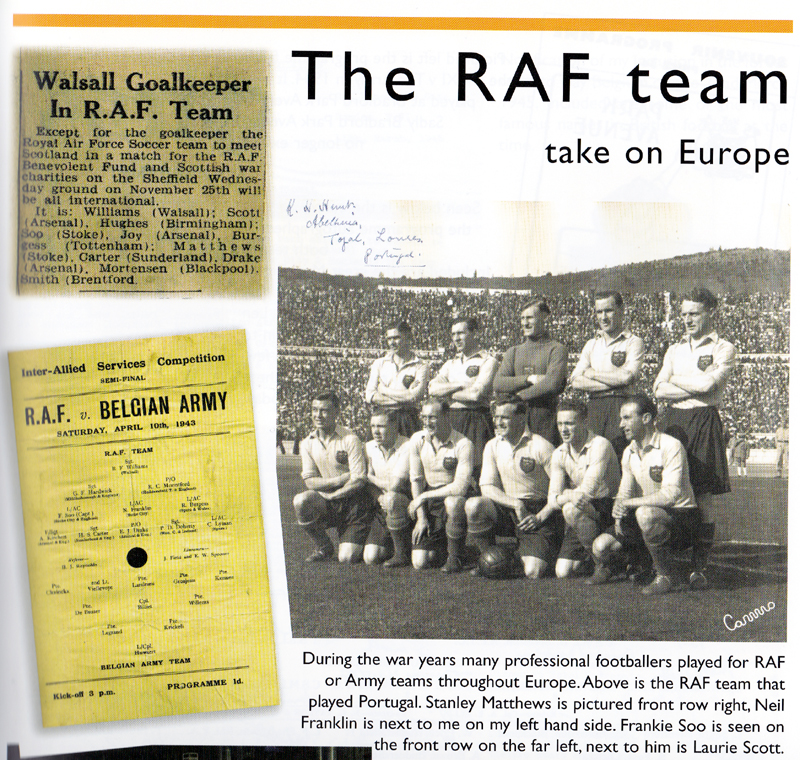 A half-page from Bert Williams’ briliant book, The Cat In Sheep’s Clothing.

Recollections and keepsakes from Wolves players who served in the armed forces are being collated by staff at RAF Cosford.

The club have firm roots in services football dating back to when Stan Cullis, Dennis Westcott, Jimmy Mullen, Frank Taylor and others from Molineux played in Army teams during the Second World War.

It being Cosford, the spotlight with this search is more on the RAF – an area in which Bert Williams, Dicky Dorsett, Peter Broadbent and Ron Flowers served, albeit the latter two in the peacetime of the early 1950s.

Williams, a Walsall player until 1945, represented the RAF at home and abroad during the conflict and lined up alongside stars such as George Hardwick, Neil Franklin, Raich Carter and Ron Burgess in a side captained by Stoke’s Frank Soo.

“Bert was a physical training instructor here and was kind enough to be interviewed by myself, Graham Hughes and Pat Quirke about two years ago,” said Cosford education officer Philip Clayton.

“His late wife used to keep all his RAF letters and one thing led to another. A photo of him arriving with Stan Mortensen at RAF Lossiemouth turned up, so did a coin with Raich Carter on it, and things snowballed.

“We also interviewed Ron Flowers here about two months ago and have been in contact with the family of a guy called Laurie Middleton, who played for Notts County and is in his 90s.

“My job is dealing with schools and colleges, even dementia groups, and talking about footballers is often a good way to get the message across.”

In addition to the RAF appearances chalked up by a keeper who is now aged 93, Broadbent is said by Wolves reference books to have represented the side against an FA XI in 1950-51 and 1952-53 and Flowers played in the latter of those games.

There are other obvious connections between that particular branch of the services and Molineux.

Sir Jack Hayward, having lied about his age so he could sign up to fight for his country, flew gliders to help the evacuation process in the Far East at the end of the war.

And the much younger Gerry Taylor – featured more than once by this site – still works at Cosford, where he has put on a different uniform in recent years to the police one he wore for many years.

Ron Flowers – earned his stripes on the field as well as off it.

Souvenirs donated by Williams and Flowers, who is also a former PTI, are on show for the benefit of the current instructors at the base.

The search for more information about footballers and the RAF goes on and Philip added: “I have no idea where all this will lead us but I’d be delighted to hear from anyone with stories or souvenirs.”