Birthday With A Difference For Barry

He was blooded early in Wolves’ first team, he left earlier than some at Molineux would have liked and now Barry Powell has celebrated his 60th birthday early.

The midfielder doesn’t reach this particular milestone until the end of January but was accompanied by almost 300 guests when choosing to stage his festivities last weekend.

“I was very keen to put some musical entertainment on and the band I really wanted there could only appear now – not a date in the New Year,” Powell said. “I have seen them five or six times and they have been superb each time. They made it a great night for everyone again this time.

“I went to a 70th birthday do the next evening and it was as if I’d aged ten years through letting my hair down a bit! The celebrations around my actual day in January will be quieter – just a family do probably.”

Steve Daley, Geoff Palmer, Phil Parkes, Terry Wharton and John Rutter were there from the player’s first playing spell at Molineux while his second club Coventry were represented by Mick Coop and Ray Gooding. Former Birmingham and Stoke defender Ian Clarkson, who also now works in coaching in the education sector, was there as well.

Despite being deep in Sky Blue territory at Kenilworth Sports and Social Club, Barry described Wolves – where he totalled 96 senior appearances across his two stays – as his first football love.

“They gave me my first big chance and it’s where I had to grow up and start to prove myself,” he said. “Geoff and Steve were my big mates there because they are the same sort of age as me and Geoff signed within a week or so of me arriving.

“Geoff was the only one who was allowed to ride a motor cycle. That was because he lived in Cannock, a bit further away from the ground than the rest of us.

“I couldn’t drive at that point but kidded him I could ride a motor bike and helped myself to his keys one day and managed to get it started. I had no idea how to handle it, though, and was very lucky not to do myself some harm when I shot across Waterloo Road on it out of control.

“He was also with me when I had my first holiday away without my parents. Sammy Chung booked it because we wouldn’t have had a clue what to do and we went to Palma in Majorca, where we ended up cycling around 25 miles across the island because we had heard Bilston’s players were over there at the same time.”

Kenilworth-born Powell played almost 200 games for Coventry and was described on mic by Daley as: “Arguably their best ever midfielder. At least we argue a lot about it!” 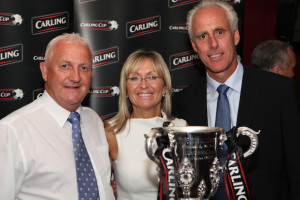 Powell and his wife Tina along with Mick McCarthy and some cherished silverware at a London Wolves dinner in recent years. Photo by Rob Clayton.

He also served both Wolves and Coventry in coaching or other off-field capacities.

Rutter got lucky with his invitation, having rung Barry – with Wolves Heroes as a go-between – earlier this season and being told to go along. The two hadn’t met since being in rival camps when Wolves went to Stockport in the second half of the 1980s. A round of golf at Kenilworth rounded off the weekend of merriment.

* Modesty will have seen to it that you won’t have read this in the Express & Star but the musical turn at the party were The Swains, who are fronted by the paper’s long-time Assistant Sports Editor and columnist Martin Swain.