Gary A Man Of Many Stories 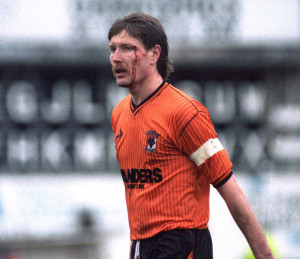 Gary Bellamy in action against Plymouth in 1990.

As one of the unsung dependables of the Wolves team who rampaged through the lower divisions a quarter of a century ago, Gary Bellamy rarely wrote headlines.

He was always seen as solid and reliable rather than in any way flamboyant or one to make the news.

As footballers do, his team-mates mocked this quiet professionalism by chiding him and stifling some pretend yawns when the squad of 1988 returned for a Sherpa Van reunion 20 years on and were each asked while on the stage to give a brief update on what they were up to now.

Now, though, would appear to be a good time to answer back on the defender’s behalf because the passing of the years has revealed that he was, indeed, a man of various news ‘angles.’

We knew back in the late 1980s that he was related to Simon Coleman, then a defender with Mansfield Town and a man later to move to Molineux on loan.

We also knew that he had had trials with Nottinghamshire County Cricket Club and been an Anglo Scottish Cup winner with Chesterfield, who crushed Rangers, no less, by a scarcely believable 3-0 margin at Saltergate in the second leg of the semi-final.

The revelations continue now with him in his early 50s and we can promise buyers of the Wolves match-day programme an interesting read after he was interviewed at length in the countdown to next week’s Molineux six-pointer against another of his former clubs, Leyton Orient.

Catching up on the tale of how he came to sign permanently at Brisbane Road is worth a couple of minutes of any fan’s time, as are the recollections of his debut as a fully-fledged player in East London, in which he found himself up against an old school pal.

And the more modern look.

Another little-known fact concerns the identity of one of the managers he played for at Orient – a coach who was to work impressively at Wolves in subsequent years – and there were a couple of unusual long sequences of results in his three and a half years with them. He was even honoured with a notable terrace ditty.

For a generally mild-mannered man, Gary recognises some irony in his ability to fall out with managers and directors, Graham Turner among them at the end at Wolves. But one spat takes some beating.

We kid you not – he was once dropped at another of his clubs for smiling, although we will leave that story for another day. This little lot will keep us happily in anecdotes for now.